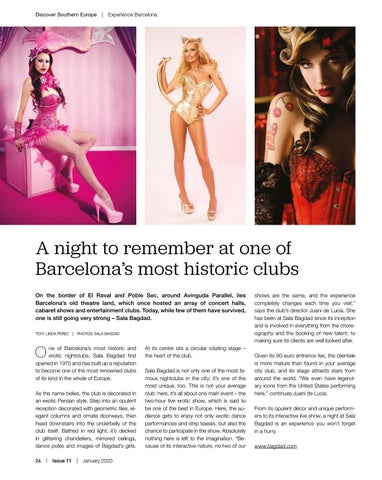 A night to remember at one of Barcelona’s most historic clubs On the border of El Raval and Poble Sec, around Avinguda Parallel, lies Barcelona’s old theatre land, which once hosted an array of concert halls, cabaret shows and entertainment clubs. Today, while few of them have survived, one is still going very strong – Sala Bagdad. TEXT: LINDA PEREZ  |  PHOTOS: SALA BAGDAD

At its centre sits a circular rotating stage – the heart of the club.

As the name belies, the club is decorated in an exotic Persian style. Step into an opulent reception decorated with geometric tiles, elegant columns and ornate doorways, then head downstairs into the underbelly of the club itself. Bathed in red light, it’s decked in glittering chandeliers, mirrored ceilings, dance poles and images of Bagdad’s girls.

shows are the same, and the experience completely changes each time you visit,” says the club’s director Juani de Lucia. She has been at Sala Bagdad since its inception and is involved in everything from the choreography and the booking of new talent, to making sure its clients are well looked after. Given its 90-euro entrance fee, the clientele is more mature than found in your average city club, and its stage attracts stars from around the world. “We even have legendary icons from the United States performing here,” continues Juani de Lucia. From its opulent décor and unique performers to its interactive live show, a night at Sala Bagdad is an experience you won’t forget in a hurry. www.bagdad.com