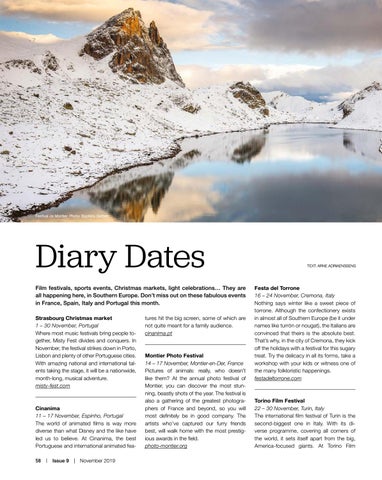 Diary Dates Film festivals, sports events, Christmas markets, light celebrations… They are all happening here, in Southern Europe. Don’t miss out on these fabulous events in France, Spain, Italy and Portugal this month. Strasbourg Christmas market 1 – 30 November, Portugal Where most music festivals bring people together, Misty Fest divides and conquers. In November, the festival strikes down in Porto, Lisbon and plenty of other Portuguese cities. With amazing national and international talents taking the stage, it will be a nationwide, month-long, musical adventure. misty-fest.com

Cinanima 11 – 17 November, Espinho, Portugal The world of animated films is way more diverse than what Disney and the like have led us to believe. At Cinanima, the best Portuguese and international animated fea58  |  Issue 9  |  November 2019

tures hit the big screen, some of which are not quite meant for a family audience. cinanima.pt

Montier Photo Festival 14 – 17 November, Montier-en-Der, France Pictures of animals: really, who doesn’t like them? At the annual photo festival of Montier, you can discover the most stunning, beastly shots of the year. The festival is also a gathering of the greatest photographers of France and beyond, so you will most definitely be in good company. The artists who’ve captured our furry friends best, will walk home with the most prestigious awards in the field. photo-montier.org

Festa del Torrone 16 – 24 November, Cremona, Italy Nothing says winter like a sweet piece of torrone. Although the confectionery exists in almost all of Southern Europe (be it under names like turrón or nougat), the Italians are convinced that theirs is the absolute best. That’s why, in the city of Cremona, they kick off the holidays with a festival for this sugary treat. Try the delicacy in all its forms, take a workshop with your kids or witness one of the many folkloristic happenings. festadeltorrone.com

Torino Film Festival 22 – 30 November, Turin, Italy The international film festival of Turin is the second-biggest one in Italy. With its diverse programme, covering all corners of the world, it sets itself apart from the big, America-focused giants. At Torino Film