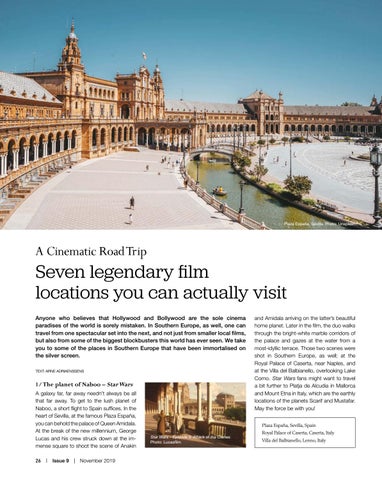 Seven legendary film locations you can actually visit Anyone who believes that Hollywood and Bollywood are the sole cinema paradises of the world is sorely mistaken. In Southern Europe, as well, one can travel from one spectacular set into the next, and not just from smaller local films, but also from some of the biggest blockbusters this world has ever seen. We take you to some of the places in Southern Europe that have been immortalised on the silver screen. TEXT: ARNE ADRIAENSSENS

1/ The planet of Naboo – Star Wars A galaxy far, far away needn’t always be all that far away. To get to the lush planet of Naboo, a short flight to Spain suffices. In the heart of Sevilla, at the famous Plaza España, you can behold the palace of Queen Amidala. At the break of the new millennium, George Lucas and his crew struck down at the immense square to shoot the scene of Anakin 26  |  Issue 9  |  November 2019

and Amidala arriving on the latter’s beautiful home planet. Later in the film, the duo walks through the bright-white marble corridors of the palace and gazes at the water from a most-idyllic terrace. Those two scenes were shot in Southern Europe, as well; at the Royal Palace of Caserta, near Naples, and at the Villa del Balbianello, overlooking Lake Como. Star Wars fans might want to travel a bit further to Platja de Alcudia in Mallorca and Mount Etna in Italy, which are the earthly locations of the planets Scarif and Mustafar. May the force be with you! Plaza España, Sevilla, Spain