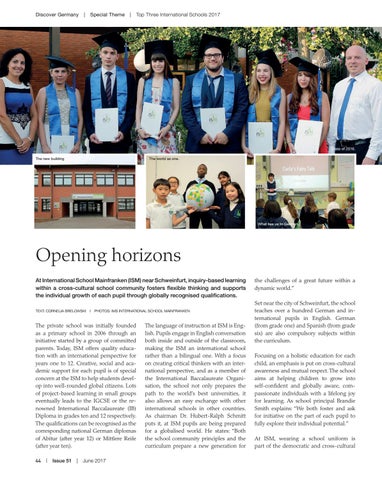 The world as one.

What ties us to Germany.

The private school was initially founded as a primary school in 2006 through an initiative started by a group of committed parents. Today, ISM offers quality education with an international perspective for years one to 12. Creative, social and academic support for each pupil is of special concern at the ISM to help students develop into well-rounded global citizens. Lots of project-based learning in small groups eventually leads to the IGCSE or the renowned International Baccalaureate (IB) Diploma in grades ten and 12 respectively. The qualifications can be recognised as the corresponding national German diplomas of Abitur (after year 12) or Mittlere Reife (after year ten). 44  |  Issue 51  |  June 2017

The language of instruction at ISM is English. Pupils engage in English conversation both inside and outside of the classroom, making the ISM an international school rather than a bilingual one. With a focus on creating critical thinkers with an international perspective, and as a member of the International Baccalaureate Organisation, the school not only prepares the path to the world’s best universities, it also allows an easy exchange with other international schools in other countries. As chairman Dr. Hubert-Ralph Schmitt puts it, at ISM pupils are being prepared for a globalised world. He states: “Both the school community principles and the curriculum prepare a new generation for

the challenges of a great future within a dynamic world.” Set near the city of Schweinfurt, the school teaches over a hundred German and international pupils in English. German (from grade one) and Spanish (from grade six) are also compulsory subjects within the curriculum. Focusing on a holistic education for each child, an emphasis is put on cross-cultural awareness and mutual respect. The school aims at helping children to grow into self-confident and globally aware, compassionate individuals with a lifelong joy for learning. As school principal Brandie Smith explains: “We both foster and ask for initiative on the part of each pupil to fully explore their individual potential.” At ISM, wearing a school uniform is part of the democratic and cross-cultural