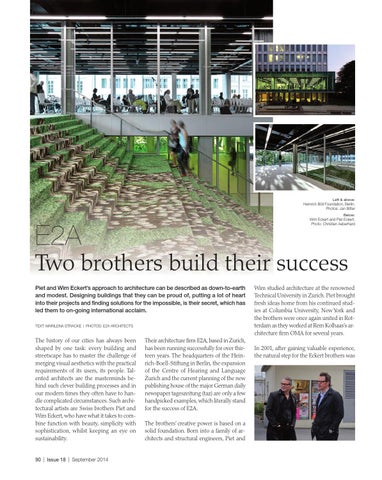 Two brothers build their success Piet and Wim Eckert’s approach to architecture can be described as down-to-earth and modest. Designing buildings that they can be proud of, putting a lot of heart into their projects and finding solutions for the impossible, is their secret, which has led them to on-going international acclaim. TEXT: MARILENA STRACKE | PHOTOS: E2A ARCHITECTS

The history of our cities has always been shaped by one task: every building and streetscape has to master the challenge of merging visual aesthetics with the practical requirements of its users, its people. Talented architects are the masterminds behind such clever building processes and in our modern times they often have to handle complicated circumstances. Such architectural artists are Swiss brothers Piet and Wim Eckert, who have what it takes to combine function with beauty, simplicity with sophistication, whilst keeping an eye on sustainability.

Their architecture firm E2A, based in Zurich, has been running successfully for over thirteen years. The headquarters of the Heinrich-Boell-Stiftung in Berlin, the expansion of the Centre of Hearing and Language Zurich and the current planning of the new publishing house of the major German daily newspaper tageszeitung (taz) are only a few handpicked examples, which literally stand for the success of E2A. The brothers’ creative power is based on a solid foundation. Born into a family of architects and structural engineers, Piet and

Wim studied architecture at the renowned Technical University in Zurich. Piet brought fresh ideas home from his continued studies at Columbia University, New York and the brothers were once again united in Rotterdam as they worked at Rem Kolhaas’s architecture firm OMA for several years. In 2001, after gaining valuable experience, the natural step for the Eckert brothers was