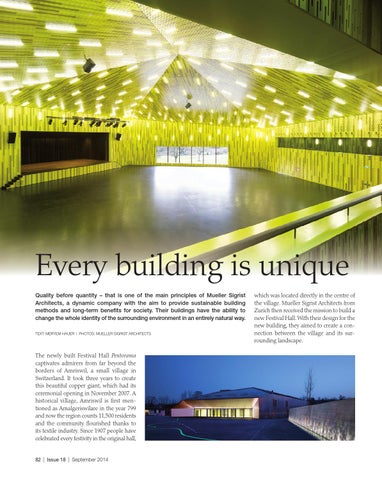 Every building is unique Quality before quantity â&amp;#x20AC;&amp;#x201C; that is one of the main principles of Mueller Sigrist Architects, a dynamic company with the aim to provide sustainable building methods and long-term benefits for society. Their buildings have the ability to change the whole identity of the surrounding environment in an entirely natural way. TEXT: MERYEM HAUER | PHOTOS: MUELLER SIGRIST ARCHITECTS

The newly built Festival Hall Pentorama captivates admirers from far beyond the borders of Amriswil, a small village in Switzerland. It took three years to create this beautiful copper giant, which had its ceremonial opening in November 2007. A historical village, Amriswil is first mentioned as Amalgeriswilare in the year 799 and now the region counts 11,500 residents and the community flourished thanks to its textile industry. Since 1907 people have celebrated every festivity in the original hall,

which was located directly in the centre of the village. Mueller Sigrist Architects from Zurich then received the mission to build a new Festival Hall. With their design for the new building, they aimed to create a connection between the village and its surrounding landscape.