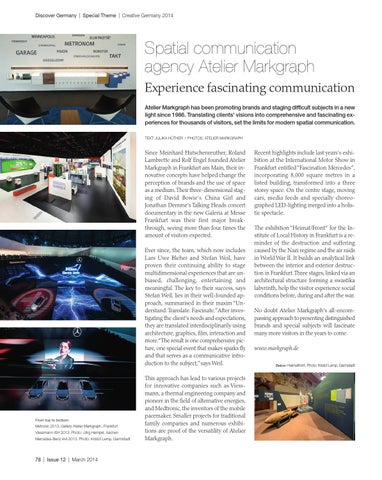 Since Meinhard Hutschenreuther, Roland Lambrette and Rolf Engel founded Atelier Markgraph in Frankfurt am Main, their innovative concepts have helped change the perception of brands and the use of space as a medium. Their three-dimensional staging of David Bowie's China Girl and Jonathan Demme's Talking Heads concert documentary in the new Galeria at Messe Frankfurt was their first major breakthrough, seeing more than four times the amount of visitors expected. Ever since, the team, which now includes Lars Uwe Bleher and Stefan Weil, have proven their continuing ability to stage multidimensional experiences that are unbiased, challenging, entertaining and meaningful. The key to their success, says Stefan Weil, lies in their well-founded approach, summarised in their maxim “Understand. Translate. Fascinate.”After investigating the client's needs and expectations, they are translated interdisciplinarily using architecture, graphics, film, interaction and more.“The result is one comprehensive picture, one special event that makes sparks fly and that serves as a communicative introduction to the subject,” says Weil.

This approach has lead to various projects for innovative companies such as Viessmann, a thermal engineering company and pioneer in the field of alternative energies, and Medtronic, the inventors of the mobile pacemaker. Smaller projects for traditional family companies and numerous exhibitions are proof of the versatility of Atelier Markgraph.

Recent highlights include last years's exhibition at the International Motor Show in Frankfurt entitled “Fascination Mercedes”, incorporating 8,000 square metres in a listed building, transformed into a three storey space. On the centre stage, moving cars, media feeds and specially choreographed LED-lighting merged into a holistic spectacle. The exhibition “Heimat/Front“ for the Institute of Local History in Frankfurt is a reminder of the destruction and suffering caused by the Nazi regime and the air raids in World War II. It builds an analytical link between the interior and exterior destruction in Frankfurt. Three stages, linked via an architectural structure forming a swastika labyrinth, help the visitor experience social conditions before, during and after the war. No doubt Atelier Markgraph's all-encompassing approach to presenting distinguished brands and special subjects will fascinate many more visitors in the years to come. www.markgraph.de Below: Heimatfront. Photo: Kristof Lemp, Darmstadt