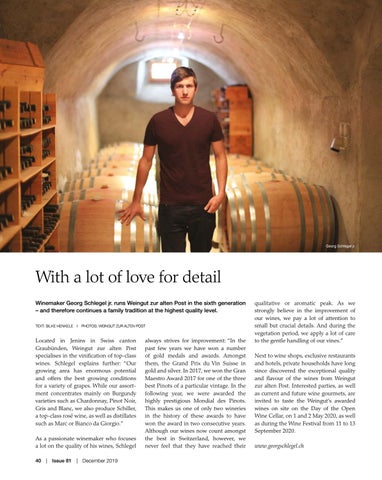 Located in Jenins in Swiss canton Graubünden, Weingut zur alten Post specialises in the vinification of top-class wines. Schlegel explains further: “Our growing area has enormous potential and offers the best growing conditions for a variety of grapes. While our assortment concentrates mainly on Burgundy varieties such as Chardonnay, Pinot Noir, Gris and Blanc, we also produce Schiller, a top-class rosé wine, as well as distillates such as Marc or Bianco da Giorgio.” As a passionate winemaker who focuses a lot on the quality of his wines, Schlegel 40  |  Issue 81  |  December 2019

always strives for improvement: “In the past few years we have won a number of gold medals and awards. Amongst them, the Grand Prix du Vin Suisse in gold and silver. In 2017, we won the Gran Maestro Award 2017 for one of the three best Pinots of a particular vintage. In the following year, we were awarded the highly prestigious Mondial des Pinots. This makes us one of only two wineries in the history of these awards to have won the award in two consecutive years. Although our wines now count amongst the best in Switzerland, however, we never feel that they have reached their

qualitative or aromatic peak. As we strongly believe in the improvement of our wines, we pay a lot of attention to small but crucial details. And during the vegetation period, we apply a lot of care to the gentle handling of our vines.” Next to wine shops, exclusive restaurants and hotels, private households have long since discovered the exceptional quality and flavour of the wines from Weingut zur alten Post. Interested parties, as well as current and future wine gourmets, are invited to taste the Weingut’s awarded wines on site on the Day of the Open Wine Cellar, on 1 and 2 May 2020, as well as during the Wine Festival from 11 to 13 September 2020. www.georgschlegel.ch