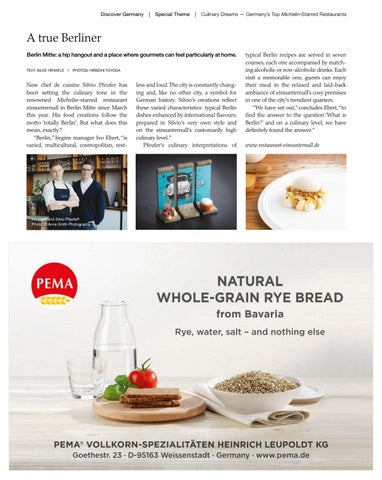 A true Berliner Berlin Mitte: a hip hangout and a place where gourmets can feel particularly at home. TEXT: SILKE HENKELE I PHOTOS: HIRSOHI TOYODA

New chef de cuisine Silvio Pfeufer has been setting the culinary tone in the renowned Michelin-starred restaurant einsunternull in Berlin Mitte since March this year. His food creations follow the motto ‘totally Berlin’. But what does this mean, exactly? “Berlin,” begins manager Ivo Ebert, “is varied, multicultural, cosmopolitan, rest-

less and loud. The city is constantly changing and, like no other city, a symbol for German history. Silvio’s creations reflect these varied characteristics: typical Berlin dishes enhanced by international flavours, prepared in Silvio’s very own style and on the einsunternull’s customarily high culinary level.” Pfeufer’s culinary interpretations of

typical Berlin recipes are served in seven courses, each one accompanied by matching alcoholic or non-alcoholic drinks. Each visit a memorable one, guests can enjoy their meal in the relaxed and laid-back ambiance of einsunternull’s cosy premises in one of the city’s trendiest quarters. “We have set out,” concludes Ebert, “to find the answer to the question ‘What is Berlin?’ and on a culinary level, we have definitely found the answer.” www.restaurant-einsunternull.de