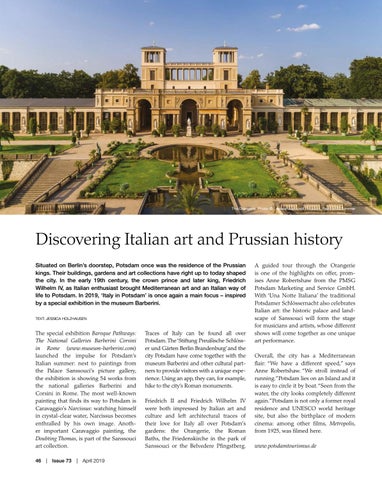 Discovering Italian art and Prussian history Situated on Berlin’s doorstep, Potsdam once was the residence of the Prussian kings. Their buildings, gardens and art collections have right up to today shaped the city. In the early 19th century, the crown prince and later king, Friedrich Wilhelm IV, as Italian enthusiast brought Mediterranean art and an Italian way of life to Potsdam. In 2019, ‘Italy in Potsdam’ is once again a main focus – inspired by a special exhibition in the museum Barberini. TEXT: JESSICA HOLZHAUSEN

The special exhibition Baroque Pathways: The National Galleries Barberini Corsini in Rome (www.museum-barberini.com) launched the impulse for Potsdam’s Italian summer: next to paintings from the Palace Sanssouci’s picture gallery, the exhibition is showing 54 works from the national galleries Barberini and Corsini in Rome. The most well-known painting that finds its way to Potsdam is Caravaggio’s Narcissus: watching himself in crystal-clear water, Narcissus becomes enthralled by his own image. Another important Caravaggio painting, the Doubting Thomas, is part of the Sanssouci art collection. 46  |  Issue 73  |  April 2019

Traces of Italy can be found all over Potsdam. The ‘Stiftung Preußische Schlösser und Gärten Berlin Brandenburg’ and the city Potsdam have come together with the museum Barberini and other cultural partners to provide visitors with a unique experience. Using an app, they can, for example, hike to the city’s Roman monuments. Friedrich II and Friedrich Wilhelm IV were both impressed by Italian art and culture and left architectural traces of their love for Italy all over Potsdam’s gardens: the Orangerie, the Roman Baths, the Friedenskirche in the park of Sanssouci or the Belvedere Pfingstberg.

A guided tour through the Orangerie is one of the highlights on offer, promises Anne Robertshaw from the PMSG Potsdam Marketing and Service GmbH. With ‘Una Notte Italiana’ the traditional Potsdamer Schlössernacht also celebrates Italian art: the historic palace and landscape of Sanssouci will form the stage for musicians and artists, whose different shows will come together as one unique art performance. Overall, the city has a Mediterranean flair: “We have a different speed,” says Anne Robertshaw. “We stroll instead of running.” Potsdam lies on an Island and it is easy to circle it by boat. “Seen from the water, the city looks completely different again.” Potsdam is not only a former royal residence and UNESCO world heritage site, but also the birthplace of modern cinema: among other films, Metropolis, from 1925, was filmed here. www.potsdamtourismus.de