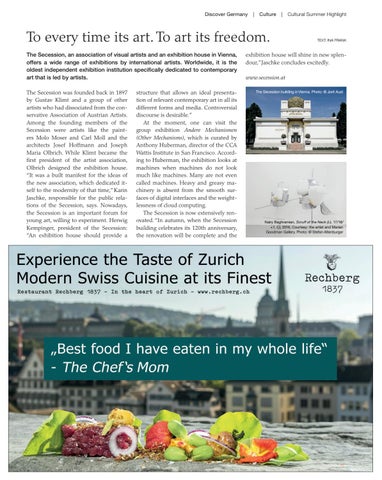 To every time its art. To art its freedom. The Secession, an association of visual artists and an exhibition house in Vienna, offers a wide range of exhibitions by international artists. Worldwide, it is the oldest independent exhibition institution specifically dedicated to contemporary art that is led by artists. The Secession was founded back in 1897 by Gustav Klimt and a group of other artists who had dissociated from the conservative Association of Austrian Artists. Among the founding members of the Secession were artists like the painters Molo Moser and Carl Moll and the architects Josef Hoffmann and Joseph Maria Olbrich. While Klimt became the first president of the artist association, Olbrich designed the exhibition house. “It was a built manifest for the ideas of the new association, which dedicated itself to the modernity of that time,” Karin Jaschke, responsible for the public relations of the Secession, says. Nowadays, the Secession is an important forum for young art, willing to experiment. Herwig Kempinger, president of the Secession: “An exhibition house should provide a

structure that allows an ideal presentation of relevant contemporary art in all its different forms and media. Controversial discourse is desirable.” At the moment, one can visit the group exhibition Andere Mechanismen (Other Mechanisms), which is curated by Anthony Huberman, director of the CCA Wattis Institute in San Francisco. According to Huberman, the exhibition looks at machines when machines do not look much like machines. Many are not even called machines. Heavy and greasy machinery is absent from the smooth surfaces of digital interfaces and the weightlessness of cloud computing. The Secession is now extensively renovated. “In autumn, when the Secession building celebrates its 120th anniversary, the renovation will be complete and the