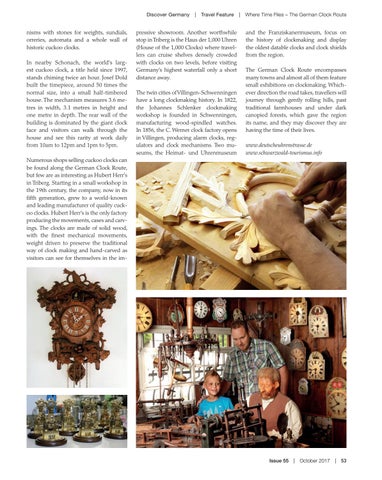 nisms with stones for weights, sundials, orreries, automata and a whole wall of historic cuckoo clocks. In nearby Schonach, the world’s largest cuckoo clock, a title held since 1997, stands chiming twice an hour. Josef Dold built the timepiece, around 50 times the normal size, into a small half-timbered house. The mechanism measures 3.6 metres in width, 3.1 metres in height and one metre in depth. The rear wall of the building is dominated by the giant clock face and visitors can walk through the house and see this rarity at work daily from 10am to 12pm and 1pm to 5pm.

pressive showroom. Another worthwhile stop in Triberg is the Haus der 1,000 Uhren (House of the 1,000 Clocks) where travellers can cruise shelves densely crowded with clocks on two levels, before visiting Germany’s highest waterfall only a short distance away. The twin cities of Villingen-Schwenningen have a long clockmaking history. In 1822, the Johannes Schlenker clockmaking workshop is founded in Schwenningen, manufacturing wood-spindled watches. In 1856, the C. Werner clock factory opens in Villingen, producing alarm clocks, regulators and clock mechanisms. Two museums, the Heimat- und Uhrenmuseum

and the Franziskanermuseum, focus on the history of clockmaking and display the oldest datable clocks and clock shields from the region. The German Clock Route encompasses many towns and almost all of them feature small exhibitions on clockmaking. Whichever direction the road takes, travellers will journey through gently rolling hills, past traditional farmhouses and under dark canopied forests, which gave the region its name, and they may discover they are having the time of their lives. www.deutscheuhrenstrasse.de www.schwarzwald-tourismus.info

Numerous shops selling cuckoo clocks can be found along the German Clock Route, but few are as interesting as Hubert Herr’s in Triberg. Starting in a small workshop in the 19th century, the company, now in its fifth generation, grew to a world-known and leading manufacturer of quality cuckoo clocks. Hubert Herr’s is the only factory producing the movements, cases and carvings. The clocks are made of solid wood, with the finest mechanical movements, weight driven to preserve the traditional way of clock making and hand-carved as visitors can see for themselves in the im-