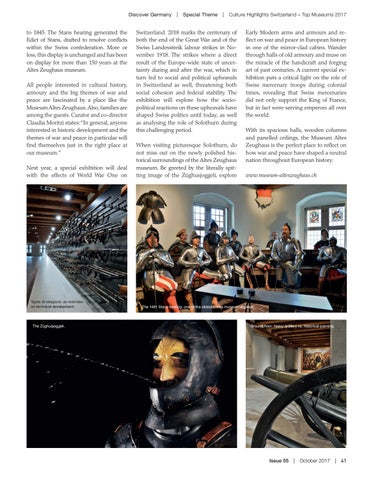 to 1845. The Stans hearing generated the Edict of Stans, drafted to resolve conflicts within the Swiss confederation. More or less, this display is unchanged and has been on display for more than 150 years at the Altes Zeughaus museum. All people interested in cultural history, armoury and the big themes of war and peace are fascinated by a place like the Museum Altes Zeughaus. Also, families are among the guests. Curator and co-director Claudia Moritzi states: “In general, anyone interested in historic development and the themes of war and peace in particular will find themselves just in the right place at our museum.” Next year, a special exhibition will deal with the effects of World War One on

Types of weapons: an overview on technical development.

Switzerland. 2018 marks the centenary of both the end of the Great War and of the Swiss Landesstreik labour strikes in November 1918. The strikes where a direct result of the Europe-wide state of uncertainty during and after the war, which in turn led to social and political upheavals in Switzerland as well, threatening both social cohesion and federal stability. The exhibition will explore how the sociopolitical reactions on these upheavals have shaped Swiss politics until today, as well as analysing the role of Solothurn during this challenging period. When visiting picturesque Solothurn, do not miss out on the newly polished historical surroundings of the Altes Zeughaus museum. Be greeted by the literally spitting image of the Züghusjoggeli, explore

Early Modern arms and armours and reflect on war and peace in European history in one of the mirror-clad cabins. Wander through halls of old armoury and muse on the miracle of the handicraft and forging art of past centuries. A current special exhibition puts a critical light on the role of Swiss mercenary troops during colonial times, revealing that Swiss mercenaries did not only support the King of France, but in fact were serving emperors all over the world. With its spacious halls, wooden columns and panelled ceilings, the Museum Altes Zeughaus is the perfect place to reflect on how war and peace have shaped a neutral nation throughout European history. www.museum-alteszeughaus.ch

The 1481 Stans hearing: one of the oldest Swiss museum displays.