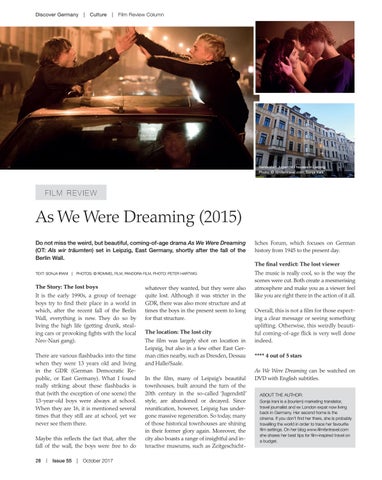 liches Forum, which focuses on German history from 1945 to the present day.

The music is really cool, so is the way the scenes were cut. Both create a mesmerising atmosphere and make you as a viewer feel like you are right there in the action of it all.

The Story: The lost boys It is the early 1990s, a group of teenage boys try to find their place in a world in which, after the recent fall of the Berlin Wall, everything is new. They do so by living the high life (getting drunk, stealing cars or provoking fights with the local Neo-Nazi gang). There are various flashbacks into the time when they were 13 years old and living in the GDR (German Democratic Republic, or East Germany). What I found really striking about these flashbacks is that (with the exception of one scene) the 13-year-old boys were always at school. When they are 16, it is mentioned several times that they still are at school, yet we never see them there. Maybe this reflects the fact that, after the fall of the wall, the boys were free to do 28  |  Issue 55  |  October 2017

whatever they wanted, but they were also quite lost. Although it was stricter in the GDR, there was also more structure and at times the boys in the present seem to long for that structure. The location: The lost city The film was largely shot on location in Leipzig, but also in a few other East German cities nearby, such as Dresden, Dessau and Halle/Saale. In the film, many of Leipzig’s beautiful townhouses, built around the turn of the 20th century in the so-called ‘Jugendstil’ style, are abandoned or decayed. Since reunification, however, Leipzig has undergone massive regeneration. So today, many of those historical townhouses are shining in their former glory again. Moreover, the city also boasts a range of insightful and interactive museums, such as Zeitgeschicht-

The final verdict: The lost viewer

Overall, this is not a film for those expecting a clear message or seeing something uplifting. Otherwise, this weirdly beautiful coming-of-age flick is very well done indeed. **** 4 out of 5 stars As We Were Dreaming can be watched on DVD with English subtitles. ABOUT THE AUTHOR: Sonja Irani is a (tourism) marketing translator, travel journalist and ex London expat now living back in Germany. Her second home is the cinema. If you don’t find her there, she is probably travelling the world in order to trace her favourite film settings. On her blog www.filmfantravel.com she shares her best tips for film-inspired travel on a budget.