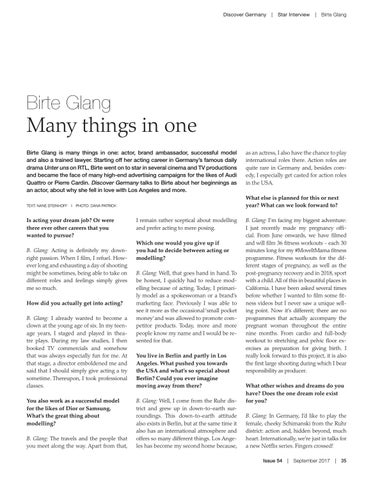 Many things in one Birte Glang is many things in one: actor, brand ambassador, successful model and also a trained lawyer. Starting off her acting career in Germany’s famous daily drama Unter uns on RTL, Birte went on to star in several cinema and TV productions and became the face of many high-end advertising campaigns for the likes of Audi Quattro or Pierre Cardin. Discover Germany talks to Birte about her beginnings as an actor, about why she fell in love with Los Angeles and more.

What else is planned for this or next year? What can we look forward to?

Is acting your dream job? Or were there ever other careers that you wanted to pursue? B. Glang: Acting is definitely my downright passion. When I film, I refuel. However long and exhausting a day of shooting might be sometimes, being able to take on different roles and feelings simply gives me so much. How did you actually get into acting? B. Glang: I already wanted to become a clown at the young age of six. In my teenage years, I staged and played in theatre plays. During my law studies, I then booked TV commercials and somehow that was always especially fun for me. At that stage, a director emboldened me and said that I should simply give acting a try sometime. Thereupon, I took professional classes. You also work as a successful model for the likes of Dior or Samsung. What’s the great thing about modelling? B. Glang: The travels and the people that you meet along the way. Apart from that,

as an actress, I also have the chance to play international roles there. Action roles are quite rare in Germany and, besides comedy, I especially get casted for action roles in the USA.

I remain rather sceptical about modelling and prefer acting to mere posing. Which one would you give up if you had to decide between acting or modelling? B. Glang: Well, that goes hand in hand. To be honest, I quickly had to reduce modelling because of acting. Today, I primarily model as a spokeswoman or a brand’s marketing face. Previously I was able to see it more as the occasional ‘small pocket money’ and was allowed to promote competitor products. Today, more and more people know my name and I would be resented for that. You live in Berlin and partly in Los Angeles. What pushed you towards the USA and what’s so special about Berlin? Could you ever imagine moving away from there? B. Glang: Well, I come from the Ruhr district and grew up in down-to-earth surroundings. This down-to-earth attitude also exists in Berlin, but at the same time it also has an international atmosphere and offers so many different things. Los Angeles has become my second home because,

B. Glang: I’m facing my biggest adventure: I just recently made my pregnancy official. From June onwards, we have filmed and will film 36 fitness workouts - each 30 minutes long for my #MoveItMama fitness programme. Fitness workouts for the different stages of pregnancy, as well as the post-pregnancy recovery and in 2018, sport with a child. All of this in beautiful places in California. I have been asked several times before whether I wanted to film some fitness videos but I never saw a unique selling point. Now it’s different; there are no programmes that actually accompany the pregnant woman throughout the entire nine months. From cardio and full-body workout to stretching and pelvic floor exercises as preparation for giving birth. I really look forward to this project, it is also the first large shooting during which I bear responsibility as producer. What other wishes and dreams do you have? Does the one dream role exist for you? B. Glang: In Germany, I’d like to play the female, cheeky Schimanski from the Ruhr district: action and, hidden beyond, much heart. Internationally, we’re just in talks for a new Netflix series. Fingers crossed! Issue 54  |  September 2017  |  35