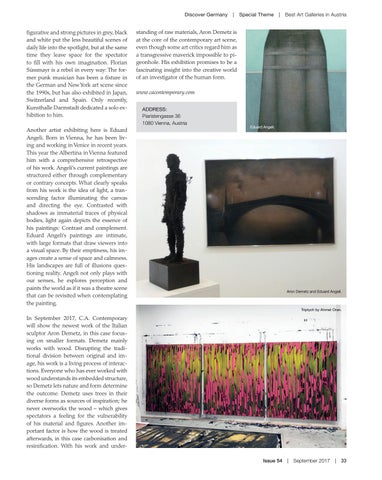 figurative and strong pictures in grey, black and white put the less beautiful scenes of daily life into the spotlight, but at the same time they leave space for the spectator to fill with his own imagination. Florian Süssmayr is a rebel in every way: The former punk musician has been a fixture in the German and New York art scene since the 1990s, but has also exhibited in Japan, Switzerland and Spain. Only recently, Kunsthalle Darmstadt dedicated a solo exhibition to him. Another artist exhibiting here is Eduard Angeli. Born in Vienna, he has been living and working in Venice in recent years. This year the Albertina in Vienna featured him with a comprehensive retrospective of his work. Angeli’s current paintings are structured either through complementary or contrary concepts. What clearly speaks from his work is the idea of light, a transcending factor illuminating the canvas and directing the eye. Contrasted with shadows as immaterial traces of physical bodies, light again depicts the essence of his paintings: Contrast and complement. Eduard Angeli’s paintings are intimate, with large formats that draw viewers into a visual space. By their emptiness, his images create a sense of space and calmness. His landscapes are full of illusions questioning reality. Angeli not only plays with our senses, he explores perception and paints the world as if it was a theatre scene that can be revisited when contemplating the painting.

standing of raw materials, Aron Demetz is at the core of the contemporary art scene, even though some art critics regard him as a transgressive maverick impossible to pigeonhole. His exhibition promises to be a fascinating insight into the creative world of an investigator of the human form. www.cacontemporary.com ADDRESS: Piaristengasse 36 1080 Vienna, Austria

In September 2017, C.A. Contemporary will show the newest work of the Italian sculptor Aron Demetz, in this case focusing on smaller formats. Demetz mainly works with wood. Disrupting the traditional division between original and image, his work is a living process of interactions. Everyone who has ever worked with wood understands its embedded structure, so Demetz lets nature and form determine the outcome. Demetz uses trees in their diverse forms as sources of inspiration; he never overworks the wood – which gives spectators a feeling for the vulnerability of his material and figures. Another important factor is how the wood is treated afterwards, in this case carbonisation and resinification. With his work and underIssue 54  |  September 2017  |  33