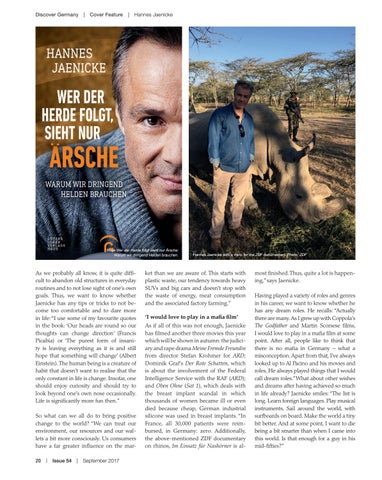 As we probably all know, it is quite difficult to abandon old structures in everyday routines and to not lose sight of one’s own goals. Thus, we want to know whether Jaenicke has any tips or tricks to not become too comfortable and to dare more in life: “I use some of my favourite quotes in the book: ‘Our heads are round so our thoughts can change direction’ (Francis Picabia) or ‘The purest form of insanity is leaving everything as it is and still hope that something will change’ (Albert Einstein). The human being is a creature of habit that doesn’t want to realise that the only constant in life is change. Insofar, one should enjoy curiosity and should try to look beyond one’s own nose occasionally. Life is significantly more fun then.” So what can we all do to bring positive change to the world? “We can treat our environment, our resources and our wallets a bit more consciously. Us consumers have a far greater influence on the mar20  |  Issue 54  |  September 2017

Hannes Jaenicke with a rhino for the ZDF documentary. Photo: ZDF

ket than we are aware of. This starts with plastic waste, our tendency towards heavy SUVs and big cars and doesn’t stop with the waste of energy, meat consumption and the associated factory farming.” ‘I would love to play in a mafia film’ As if all of this was not enough, Jaenicke has filmed another three movies this year which will be shown in autumn: the judiciary and rape drama Meine Fremde Freundin from director Stefan Krohmer for ARD; Dominik Graf’s Der Rote Schatten, which is about the involvement of the Federal Intelligence Service with the RAF (ARD); and Oben Ohne (Sat 1), which deals with the breast implant scandal in which thousands of women became ill or even died because cheap, German industrial silicone was used in breast implants. “In France, all 30,000 patients were reimbursed, in Germany: zero. Additionally, the above-mentioned ZDF documentary on rhinos, Im Einsatz für Nashörner is al-

most finished. Thus, quite a lot is happening,” says Jaenicke. Having played a variety of roles and genres in his career, we want to know whether he has any dream roles. He recalls: “Actually there are many. As I grew up with Coppola’s The Godfather and Martin Scorsese films, I would love to play in a mafia film at some point. After all, people like to think that there is no mafia in Germany – what a misconception. Apart from that, I’ve always looked up to Al Pacino and his movies and roles. He always played things that I would call dream roles.” What about other wishes and dreams after having achieved so much in life already? Jaenicke smiles: “The list is long. Learn foreign languages. Play musical instruments. Sail around the world, with surfboards on board. Make the world a tiny bit better. And at some point, I want to die being a bit smarter than when I came into this world. Is that enough for a guy in his mid-fifties?”