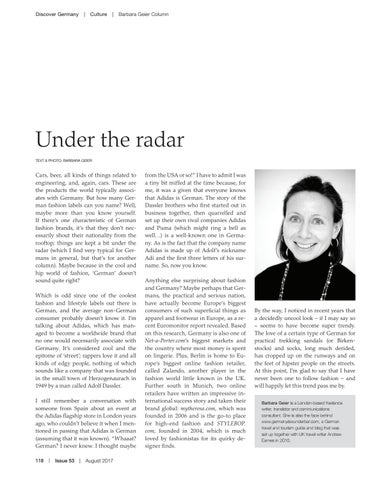 Cars, beer, all kinds of things related to engineering, and, again, cars. These are the products the world typically associates with Germany. But how many German fashion labels can you name? Well, maybe more than you know yourself. If there’s one characteristic of German fashion brands, it’s that they don’t necessarily shout their nationality from the rooftop; things are kept a bit under the radar (which I find very typical for Germans in general, but that’s for another column). Maybe because in the cool and hip world of fashion, ‘German’ doesn’t sound quite right? Which is odd since one of the coolest fashion and lifestyle labels out there is German, and the average non-German consumer probably doesn’t know it. I’m talking about Adidas, which has managed to become a worldwide brand that no one would necessarily associate with Germany. It’s considered cool and the epitome of ‘street’; rappers love it and all kinds of edgy people, nothing of which sounds like a company that was founded in the small town of Herzogenaurach in 1949 by a man called Adolf Dassler. I still remember a conversation with someone from Spain about an event at the Adidas flagship store in London years ago, who couldn’t believe it when I mentioned in passing that Adidas is German (assuming that it was known). “Whaaat? German? I never knew. I thought maybe 118  |  Issue 53  |  August 2017

from the USA or so!” I have to admit I was a tiny bit miffed at the time because, for me, it was a given that everyone knows that Adidas is German. The story of the Dassler brothers who first started out in business together, then quarrelled and set up their own rival companies Adidas and Puma (which might ring a bell as well…) is a well-known one in Germany. As is the fact that the company name Adidas is made up of Adolf’s nickname Adi and the first three letters of his surname. So, now you know. Anything else surprising about fashion and Germany? Maybe perhaps that Germans, the practical and serious nation, have actually become Europe’s biggest consumers of such superficial things as apparel and footwear in Europe, as a recent Euromonitor report revealed. Based on this research, Germany is also one of Net-a-Porter.com’s biggest markets and the country where most money is spent on lingerie. Plus, Berlin is home to Europe’s biggest online fashion retailer, called Zalando, another player in the fashion world little known in the UK. Further south in Munich, two online retailers have written an impressive international success story and taken their brand global: mytheresa.com, which was founded in 2006 and is the go-to place for high-end fashion and STYLEBOP. com, founded in 2004, which is much loved by fashionistas for its quirky designer finds.

By the way, I noticed in recent years that a decidedly uncool look – if I may say so – seems to have become super trendy. The love of a certain type of German for practical trekking sandals (or Birkenstocks) and socks, long much derided, has cropped up on the runways and on the feet of hipster people on the streets. At this point, I’m glad to say that I have never been one to follow fashion – and will happily let this trend pass me by. Barbara Geier is a London-based freelance writer, translator and communications consultant. She is also the face behind www.germanyiswunderbar.com, a German travel and tourism guide and blog that was set up together with UK travel writer Andrew Eames in 2010.