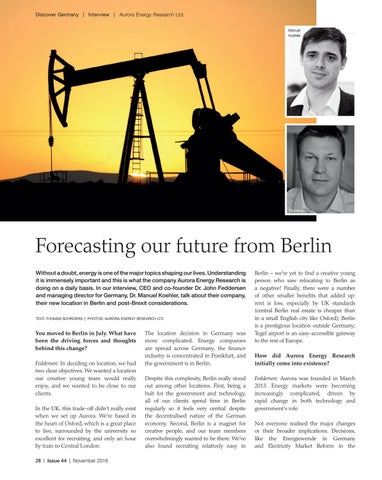 Forecasting our future from Berlin Without a doubt, energy is one of the major topics shaping our lives. Understanding it is immensely important and this is what the company Aurora Energy Research is doing on a daily basis. In our interview, CEO and co-founder Dr. John Feddersen and managing director for Germany, Dr. Manuel Koehler, talk about their company, their new location in Berlin and post-Brexit considerations. TEXT: THOMAS SCHROERS | PHOTOS: AURORA ENERGY RESEARCH LTD

You moved to Berlin in July. What have been the driving forces and thoughts behind this change? Feddersen: In deciding on location, we had two clear objectives. We wanted a location our creative young team would really enjoy, and we wanted to be close to our clients. In the UK, this trade-off didn’t really exist when we set up Aurora. We’re based in the heart of Oxford, which is a great place to live, surrounded by the university so excellent for recruiting, and only an hour by train to Central London. 28 | Issue 44 | November 2016

The location decision in Germany was more complicated. Energy companies are spread across Germany, the finance industry is concentrated in Frankfurt, and the government is in Berlin. Despite this complexity, Berlin really stood out among other locations. First, being a hub for the government and technology, all of our clients spend time in Berlin regularly so it feels very central despite the decentralised nature of the German economy. Second, Berlin is a magnet for creative people, and our team members overwhelmingly wanted to be there. We’ve also found recruiting relatively easy in

Berlin – we’re yet to find a creative young person who saw relocating to Berlin as a negative! Finally, there were a number of other smaller benefits that added up: rent is low, especially by UK standards (central Berlin real estate is cheaper than in a small English city like Oxford); Berlin is a prestigious location outside Germany; Tegel airport is an easy-accessible gateway to the rest of Europe. How did Aurora Energy Research initially come into existence? Feddersen: Aurora was founded in March 2013. Energy markets were becoming increasingly complicated, driven by rapid change in both technology and government’s role. Not everyone realised the major changes or their broader implications. Decisions, like the Energiewende in Germany and Electricity Market Reform in the