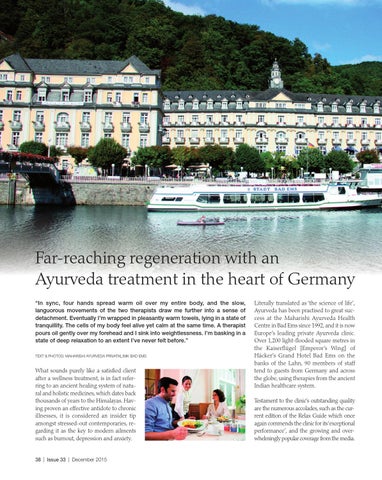 Far-reaching regeneration with an Ayurveda treatment in the heart of Germany “In sync, four hands spread warm oil over my entire body, and the slow, languorous movements of the two therapists draw me further into a sense of detachment. Eventually I’m wrapped in pleasantly warm towels, lying in a state of tranquillity. The cells of my body feel alive yet calm at the same time. A therapist pours oil gently over my forehead and I sink into weightlessness. I’m basking in a state of deep relaxation to an extent I’ve never felt before.” TEXT &amp; PHOTOS: MAHARISHI AYURVEDA PRIVATKLINIK BAD EMS

What sounds purely like a satisfied client after a wellness treatment, is in fact referring to an ancient healing system of natural and holistic medicines, which dates back thousands of years to the Himalayas. Having proven an effective antidote to chronic illnesses, it is considered an insider tip amongst stressed-out contemporaries, regarding it as the key to modern ailments such as burnout, depression and anxiety.

Literally translated as ‘the science of life’, Ayurveda has been practised to great success at the Maharishi Ayurveda Health Centre in Bad Ems since 1992, and it is now Europe’s leading private Ayurveda clinic. Over 1,200 light-flooded square metres in the Kaiserflügel [Emperor’s Wing] of Häcker’s Grand Hotel Bad Ems on the banks of the Lahn, 90 members of staff tend to guests from Germany and across the globe, using therapies from the ancient Indian healthcare system. Testament to the clinic’s outstanding quality are the numerous accolades, such as the current edition of the Relax Guide which once again commends the clinic for its‘exceptional performance’, and the growing and overwhelmingly popular coverage from the media.