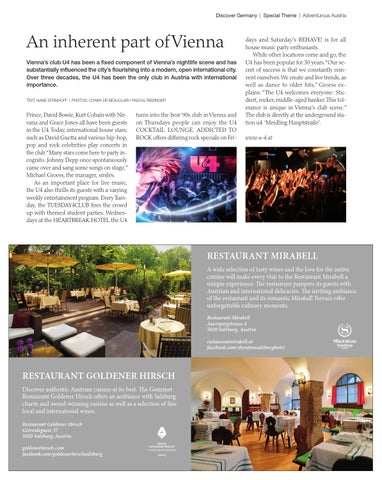 An inherent part of Vienna Vienna’s club U4 has been a fixed component of Vienna’s nightlife scene and has substantially influenced the city’s flourishing into a modern, open international city. Over three decades, the U4 has been the only club in Austria with international importance. TEXT: NANE STEINHOFF I PHOTOS: CONNY DE BEAUCLAIR I PASCAL RIESINGER

Prince, David Bowie, Kurt Cobain with Nirvana and Grace Jones all have been guests in the U4. Today, international house stars, such as David Guetta and various hip-hop, pop and rock celebrities play concerts in the club.“Many stars come here to party incognito. Johnny Depp once spontaneously came over and sang some songs on stage,” Michael Groess, the manager, smiles. As an important place for live music, the U4 also thrills its guests with a varying weekly entertainment program. Every Tuesday, the TUESDAY4CLUB fires the crowd up with themed student parties. Wednesdays at the HEARTBREAK HOTEL the U4

turns into the best ‘90s club in Vienna and on Thursdays people can enjoy the U4 COCKTAIL LOUNGE. ADDICTED TO ROCK offers differing rock specials on Fri-

days and Saturday’s BEHAVE! is for all house music party enthusiasts. While other locations come and go, the U4 has been popular for 30 years.“Our secret of success is that we constantly reinvent ourselves. We create and live trends, as well as dance to older hits,” Groess explains. “The U4 welcomes everyone: Student, rocker, middle-aged banker. This tolerance is unique in Vienna’s club scene.” The club is directly at the underground station u4 ‘Meidling Hauptstraße’. www.u-4.at

RESTAURANT MIRABELL A wide selection of tasty wines and the love for the native cuisine will make every visit to the Restaurant Mirabell a unique experience. The restaurant pampers its guests with Austrian and international delicacies. The inviting ambiance of the restaurant and its romantic Mirabell Terrace offer unforgettable culinary moments. Restaurant Mirabell Auerspergstrasse 4 5020 Salzburg, Austria restaurantmirabell.at facebook.com/sheratonsalzburghotel