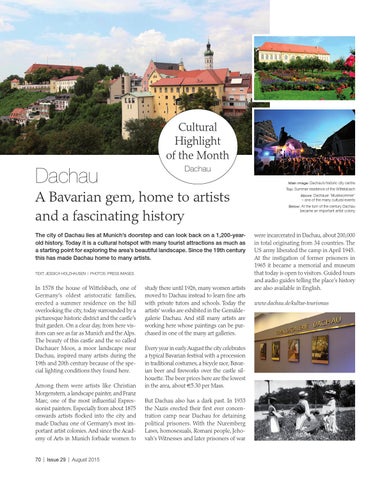 Cultural Highlight of the Month

A Bavarian gem, home to artists and a fascinating history The city of Dachau lies at Munich’s doorstep and can look back on a 1,200-yearold history. Today it is a cultural hotspot with many tourist attractions as much as a starting point for exploring the area’s beautiful landscape. Since the 19th century this has made Dachau home to many artists. TEXT: JESSICA HOLZHAUSEN | PHOTOS: PRESS IMAGES

In 1578 the house of Wittelsbach, one of Germany’s oldest aristocratic families, erected a summer residence on the hill overlooking the city, today surrounded by a picturesque historic district and the castle’s fruit garden. On a clear day, from here visitors can see as far as Munich and the Alps. The beauty of this castle and the so called Dachauer Moos, a moor landscape near Dachau, inspired many artists during the 19th and 20th century because of the special lighting conditions they found here. Among them were artists like Christian Morgenstern, a landscape painter, and Franz Marc, one of the most influential Expressionist painters. Especially from about 1875 onwards artists flocked into the city and made Dachau one of Germany’s most important artist colonies. And since the Academy of Arts in Munich forbade women to

study there until 1926, many women artists moved to Dachau instead to learn fine arts with private tutors and schools. Today the artists‘ works are exhibited in the Gemäldegalerie Dachau. And still many artists are working here whose paintings can be purchased in one of the many art galleries. Every year in early August the city celebrates a typical Bavarian festival with a procession in traditional costumes, a bicycle race, Bavarian beer and fireworks over the castle silhouette. The beer prices here are the lowest in the area, about €5.30 per Mass. But Dachau also has a dark past. In 1933 the Nazis erected their first ever concentration camp near Dachau for detaining political prisoners. With the Nuremberg Laws, homosexuals, Romani people, Jehovah’s Witnesses and later prisoners of war

Top: Summer residence of the Wittelsbach Above: Dachauer ‘Musiksommer’ – one of the many cultural events Below: At the turn of the century Dachau became an important artist colony

were incarcerated in Dachau, about 200,000 in total originating from 34 countries. The US army liberated the camp in April 1945. At the instigation of former prisoners in 1965 it became a memorial and museum that today is open to visitors. Guided tours and audio guides telling the place’s history are also available in English. www.dachau.de/kultur-tourismus