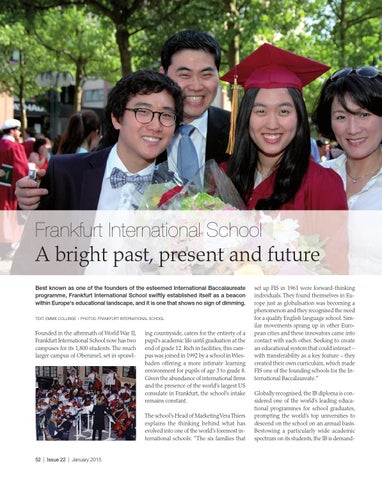 Founded in the aftermath of World War II, Frankfurt International School now has two campuses for its 1,800 students. The much larger campus of Oberursel, set in sprawl-

ing countryside, caters for the entirety of a pupil’s academic life until graduation at the end of grade 12. Rich in facilities, this campus was joined in 1992 by a school in Wiesbaden offering a more intimate learning environment for pupils of age 3 to grade 8. Given the abundance of international firms and the presence of the world’s largest US consulate in Frankfurt, the school’s intake remains constant. The school’s Head of Marketing Vera Thiers explains the thinking behind what has evolved into one of the world’s foremost international schools: ”The six families that

set up FIS in 1961 were forward-thinking individuals. They found themselves in Europe just as globalisation was becoming a phenomenon and they recognised the need for a quality English language school. Similar movements sprang up in other European cities and these innovators came into contact with each other. Seeking to create an educational system that could interact – with transferability as a key feature – they created their own curriculum, which made FIS one of the founding schools for the International Baccalaureate.” Globally recognised, the IB diploma is considered one of the world’s leading educational programmes for school graduates, prompting the world’s top universities to descend on the school on an annual basis. Bestowing a particularly wide academic spectrum on its students, the IB is demand-