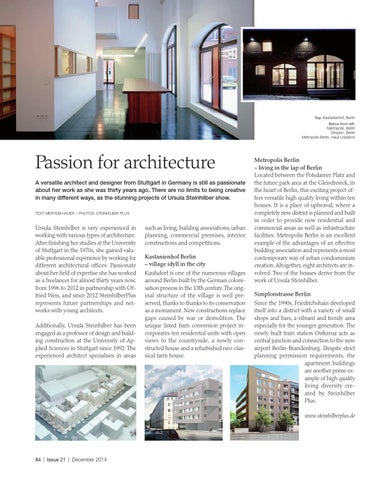 Passion for architecture A versatile architect and designer from Stuttgart in Germany is still as passionate about her work as she was thirty years ago. There are no limits to being creative in many different ways, as the stunning projects of Ursula Steinhilber show. TEXT: MERYEM HAUER | PHOTOS: STEINHILBER PLUS

Ursula Steinhilber is very experienced in working with various types of architecture. After finishing her studies at the University of Stuttgart in the 1970s, she gained valuable professional experience by working for different architectural offices. Passionate about her field of expertise she has worked as a freelancer for almost thirty years now, from 1996 to 2012 in partnership with Otfried Weis, and since 2012 SteinhilberPlus represents future partnerships and networks with young architects. Additionally, Ursula Steinhilber has been engaged as a professor of design and building construction at the University of Applied Sciences in Stuttgart since 1992. The experienced architect specialises in areas

such as living, building associations, urban planning, commercial premises, interior constructions and competitions. Kastanienhof Berlin â&#x20AC;&#x201C; village idyll in the city Kaulsdorf is one of the numerous villages around Berlin built by the German colonisation process in the 13th century.The original structure of the village is well preserved, thanks to thanks to its conservation as a monument. New constructions replace gaps caused by war or demolition. The unique listed barn conversion project incorporates ten residential units with open views to the countryside, a newly constructed house and a refurbished neo-classical farm house.

Metropolis Berlin â&#x20AC;&#x201C; living in the lap of Berlin Located between the Potsdamer Platz and the future park area at the Gleisdreieck, in the heart of Berlin, this exciting project offers versatile high quality living within ten houses. It is a place of upheaval, where a completely new district is planned and built in order to provide new residential and commercial areas as well as infrastructure facilities. Metropolis Berlin is an excellent example of the advantages of an effective building association and represents a most contemporary way of urban condominium creation. Altogether, eight architects are involved. Two of the houses derive from the work of Ursula Steinhilber. Simplonstrasse Berlin Since the 1990s, Friedrichshain developed itself into a district with a variety of small shops and bars, a vibrant and trendy area especially for the younger generation. The newly built train station Ostkreuz acts as central junction and connection to the new airport Berlin-Brandenburg. Despite strict planning permission requirements, the apartment buildings are another prime example of high quality living diversity created by Steinhilber Plus. www.steinhilberplus.de