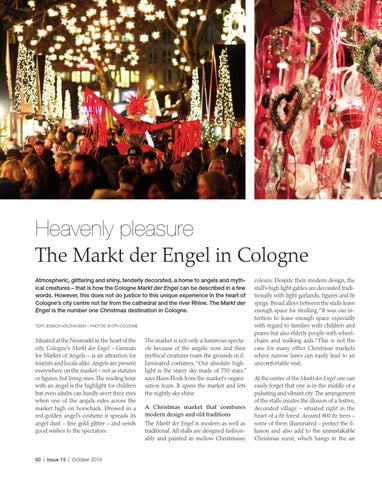 Heavenly pleasure The Markt der Engel in Cologne Atmospheric, glittering and shiny, tenderly decorated, a home to angels and mythical creatures – that is how the Cologne Markt der Engel can be described in a few words. However, this does not do justice to this unique experience in the heart of Cologne’s city centre not far from the cathedral and the river Rhine. The Markt der Engel is the number one Christmas destination in Cologne. TEXT: JESSICA HOLZHAUSEN | PHOTOS: © CPV COLOGNE

Situated at the Neumarkt in the heart of the city, Cologne’s Markt der Engel – German for Market of Angels – is an attraction for tourists and locals alike. Angels are present everywhere on the market – not as statutes or figures, but living ones.The reading hour with an angel is the highlight for children but even adults can hardly avert their eyes when one of the angels rides across the market high on horseback. Dressed in a red-golden angel’s costume it spreads its angel dust – fine gold glitter – and sends good wishes to the spectators.

The market is not only a luminous spectacle because of the angels: now and then mythical creatures roam the grounds in illuminated costumes. “Our absolute highlight is the starry sky made of 750 stars,” says Hans Flock from the market’s organisation team. It spans the market and lets the nightly sky shine. A Christmas market that combines modern design and old traditions The Markt der Engel is modern as well as traditional. All stalls are designed fashionably and painted in mellow Christmassy

colours. Despite their modern design, the stall’s high light gables are decorated traditionally with light garlands, figures and fir sprigs. Broad alleys between the stalls leave enough space for strolling.“It was our intention to leave enough space especially with regard to families with children and prams but also elderly people with wheelchairs and walking aids.” This is not the case for many other Christmas markets where narrow lanes can easily lead to an uncomfortable visit. At the centre of the Markt der Engel one can easily forget that one is in the middle of a pulsating and vibrant city.The arrangement of the stalls creates the illusion of a festive, decorated village – situated right in the heart of a fir forest. Around 800 fir trees – some of them illuminated – perfect the illusion and also add to the unmistakable Christmas scent, which hangs in the air