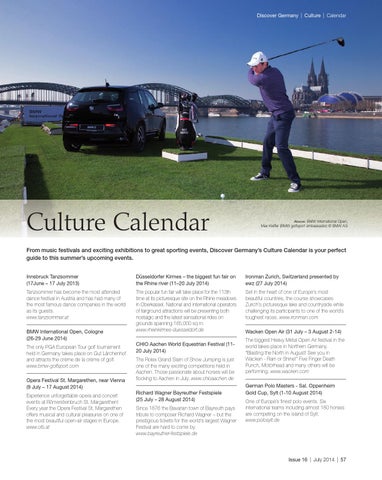 Tanzsommer has become the most attended dance festival in Austria and has had many of the most famous dance companies in the world as its guests. www.tanzsommer.at

The popular fun fair will take place for the 113th time at its picturesque site on the Rhine meadows in Oberkassel. National and international operators of fairground attractions will be presenting both nostalgic and the latest sensational rides on grounds spanning 165,000 sq m. www.rheinkirmes-duesseldorf.de

Set in the heart of one of Europe&#39;s most beautiful countries, the course showcases Zurich&#39;s picturesque lake and countryside while challenging its participants to one of the world’s toughest races. www.ironman.com

CHIO Aachen World Equestrian Festival (1120 July 2014) The Rolex Grand Slam of Show Jumping is just one of the many exciting competitions held in Aachen. Those passionate about horses will be flocking to Aachen in July. www.chioaachen.de Richard Wagner Bayreuther Festspiele (25 July – 28 August 2014) Since 1876 the Bavarian town of Bayreuth pays tribute to composer Richard Wagner – but the prestigious tickets for the world&#39;s largest Wagner Festival are hard to come by. www.bayreuther-festspiele.de