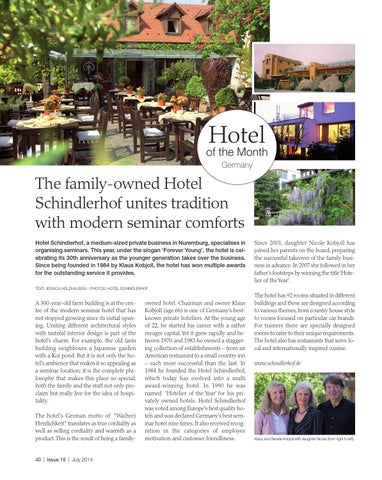 of the Month Germany

The family-owned Hotel Schindlerhof unites tradition with modern seminar comforts Hotel Schindlerhof, a medium-sized private business in Nuremburg, specialises in organising seminars. This year, under the slogan ‘Forever Young’, the hotel is celebrating its 30th anniversary as the younger generation takes over the business. Since being founded in 1984 by Klaus Kobjoll, the hotel has won multiple awards for the outstanding service it provides.

Since 2001, daughter Nicole Kobjoll has joined her parents on the board, preparing the successful takeover of the family business in advance. In 2007 she followed in her father’s footsteps by winning the title‘Hotelier of theYear’.

A 300-year-old farm building is at the centre of the modern seminar hotel that has not stopped growing since its initial opening. Uniting different architectural styles with tasteful interior design is part of the hotel’s charm. For example, the old farm building neighbours a Japanese garden with a Koi pond. But it is not only the hotel’s ambience that makes it so appealing as a seminar location; it is the complete philosophy that makes this place so special; both the family and the staff not only proclaim but really live for the idea of hospitality. The hotel’s German motto of “Wa(hre) Herzlichkeit” translates as true cordiality as well as selling cordiality and warmth as a product.This is the result of being a family-

owned hotel. Chairman and owner Klaus Kobjoll (age 66) is one of Germany’s bestknown private hoteliers. At the young age of 22, he started his career with a rather meagre capital.Yet it grew rapidly and between 1970 and 1983 he owned a staggering collection of establishments – from an American restaurant to a small country inn – each more successful than the last. In 1984 he founded the Hotel Schindlerhof, which today has evolved into a multi award-winning hotel. In 1990 he was named ‘Hotelier of the Year’ for his privately owned hotels. Hotel Schindlerhof was voted among Europe’s best quality hotels and was declared Germany’s best seminar hotel nine times. It also received recognition in the categories of employee motivation and customer friendliness.

The hotel has 92 rooms situated in different buildings and these are designed according to various themes, from country house style to rooms focused on particular car brands. For trainers there are specially designed rooms to cater to their unique requirements. The hotel also has restaurants that serve local and internationally inspired cuisine. www.schindlerhof.de

Klaus and Renate Kobjoll with daughter Nicole (from right to left).