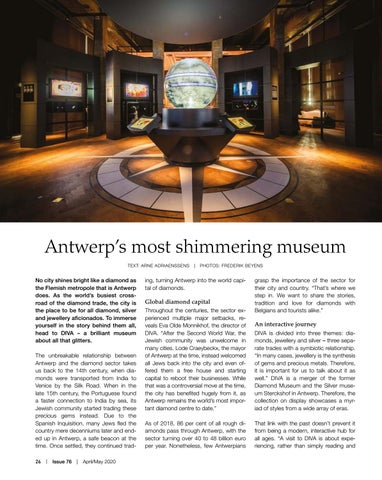 No city shines bright like a diamond as the Flemish metropole that is Antwerp does. As the world’s busiest crossroad of the diamond trade, the city is the place to be for all diamond, silver and jewellery aficionados. To immerse yourself in the story behind them all, head to DIVA – a brilliant museum about all that glitters. The unbreakable relationship between Antwerp and the diamond sector takes us back to the 14th century, when diamonds were transported from India to Venice by the Silk Road. When in the late 15th century, the Portuguese found a faster connection to India by sea, its Jewish community started trading these precious gems instead. Due to the Spanish Inquisition, many Jews fled the country mere decenniums later and ended up in Antwerp, a safe beacon at the time. Once settled, they continued trad26  |  Issue 76  |  April/May 2020

ing, turning Antwerp into the world capital of diamonds.

Global diamond capital Throughout the centuries, the sector experienced multiple major setbacks, reveals Eva Olde Monnikhof, the director of DIVA. “After the Second World War, the Jewish community was unwelcome in many cities. Lode Craeybeckx, the mayor of Antwerp at the time, instead welcomed all Jews back into the city and even offered them a free house and starting capital to reboot their businesses. While that was a controversial move at the time, the city has benefited hugely from it, as Antwerp remains the world’s most important diamond centre to date.” As of 2018, 86 per cent of all rough diamonds pass through Antwerp, with the sector turning over 40 to 48 billion euro per year. Nonetheless, few Antwerpians

grasp the importance of the sector for their city and country. “That’s where we step in. We want to share the stories, tradition and love for diamonds with Belgians and tourists alike.”

An interactive journey DIVA is divided into three themes: diamonds, jewellery and silver – three separate trades with a symbiotic relationship. “In many cases, jewellery is the synthesis of gems and precious metals. Therefore, it is important for us to talk about it as well.” DIVA is a merger of the former Diamond Museum and the Silver museum Sterckshof in Antwerp. Therefore, the collection on display showcases a myriad of styles from a wide array of eras. That link with the past doesn’t prevent it from being a modern, interactive hub for all ages. “A visit to DIVA is about experiencing, rather than simply reading and