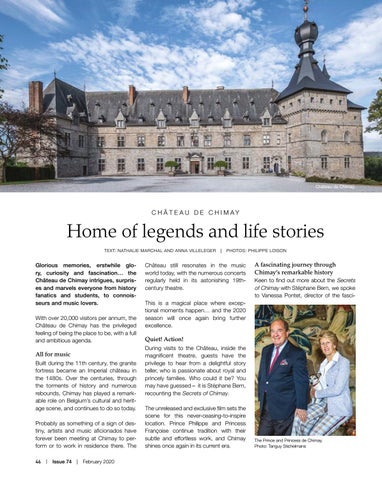 Glorious memories, erstwhile glory, curiosity and fascination… the Château de Chimay intrigues, surprises and marvels everyone from history fanatics and students, to connoisseurs and music lovers. With over 20,000 visitors per annum, the Château de Chimay has the privileged feeling of being the place to be, with a full and ambitious agenda.

All for music Built during the 11th century, the granite fortress became an Imperial château in the 1480s. Over the centuries, through the torments of history and numerous rebounds, Chimay has played a remarkable role on Belgium’s cultural and heritage scene, and continues to do so today. Probably as something of a sign of destiny, artists and music aficionados have forever been meeting at Chimay to perform or to work in residence there. The 46  |  Issue 74  |  February 2020

Château still resonates in the music world today, with the numerous concerts regularly held in its astonishing 19thcentury theatre.

A fascinating journey through Chimay’s remarkable history Keen to find out more about the Secrets of Chimay with Stéphane Bern, we spoke to Vanessa Pontet, director of the fasci-

This is a magical place where exceptional moments happen… and the 2020 season will once again bring further excellence.

Quiet! Action! During visits to the Château, inside the magnificent theatre, guests have the privilege to hear from a delightful story teller, who is passionate about royal and princely families. Who could it be? You may have guessed – it is Stéphane Bern, recounting the Secrets of Chimay. The unreleased and exclusive film sets the scene for this never-ceasing-to-inspire location. Prince Philippe and Princess Françoise continue tradition with their subtle and effortless work, and Chimay shines once again in its current era.