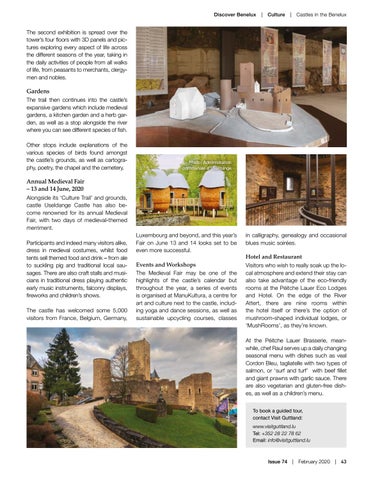 The second exhibition is spread over the tower’s four floors with 3D panels and pictures exploring every aspect of life across the different seasons of the year, taking in the daily activities of people from all walks of life, from peasants to merchants, clergymen and nobles.

Gardens The trail then continues into the castle’s expansive gardens which include medieval gardens, a kitchen garden and a herb garden, as well as a stop alongside the river where you can see different species of fish. Other stops include explanations of the various species of birds found amongst the castle’s grounds, as well as cartography, poetry, the chapel and the cemetery.

Luxembourg and beyond, and this year’s Fair on June 13 and 14 looks set to be even more successful.

Events and Workshops The Medieval Fair may be one of the highlights of the castle’s calendar but throughout the year, a series of events is organised at ManuKultura, a centre for art and culture next to the castle, including yoga and dance sessions, as well as sustainable upcycling courses, classes

Visitors who wish to really soak up the local atmosphere and extend their stay can also take advantage of the eco-friendly rooms at the Péitche Lauer Eco Lodges and Hotel. On the edge of the River Attert, there are nine rooms within the hotel itself or there’s the option of mushroom-shaped individual lodges, or ‘MushRooms’, as they’re known.

At the Péitche Lauer Brasserie, meanwhile, chef Raul serves up a daily changing seasonal menu with dishes such as veal Cordon Bleu, tagliatelle with two types of salmon, or ‘surf and turf’ with beef fillet and giant prawns with garlic sauce. There are also vegetarian and gluten-free dishes, as well as a children’s menu. To book a guided tour, contact Visit Guttland: www.visitguttland.lu Tel: +352 28 22 78 62 Email: info@visitguttland.lu