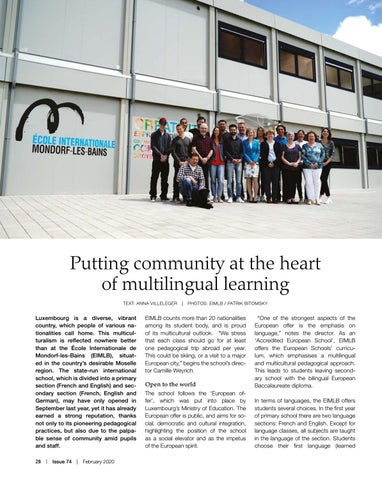 Luxembourg is a diverse, vibrant country, which people of various nationalities call home. This multiculturalism is reflected nowhere better than at the École Internationale de Mondorf-les-Bains (EIMLB), situated in the country’s desirable Moselle region. The state-run international school, which is divided into a primary section (French and English) and secondary section (French, English and German), may have only opened in September last year, yet it has already earned a strong reputation, thanks not only to its pioneering pedagogical practices, but also due to the palpable sense of community amid pupils and staff. 28  |  Issue 74  |  February 2020

EIMLB counts more than 20 nationalities among its student body, and is proud of its multicultural outlook. “We stress that each class should go for at least one pedagogical trip abroad per year. This could be skiing, or a visit to a major European city,” begins the school’s director Camille Weyrich.

Open to the world

“One of the strongest aspects of the European offer is the emphasis on language,” notes the director. As an ‘Accredited European School’, EIMLB offers the European Schools’ curriculum, which emphasises a multilingual and multicultural pedagogical approach. This leads to students leaving secondary school with the bilingual European Baccalaureate diploma.

The school follows the ‘European offer’, which was put into place by Luxembourg’s Ministry of Education. The European offer is public, and aims for social, democratic and cultural integration, highlighting the position of the school as a social elevator and as the impetus of the European spirit.

In terms of languages, the EIMLB offers students several choices. In the first year of primary school there are two language sections: French and English. Except for language classes, all subjects are taught in the language of the section. Students choose their first language (learned