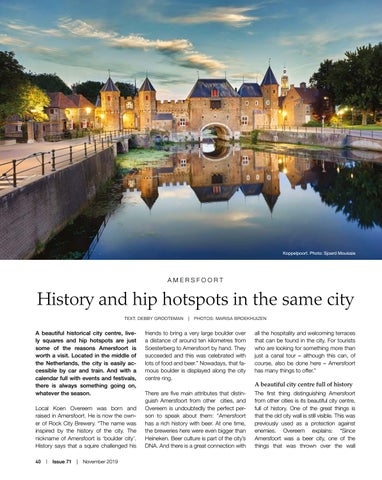 A beautiful historical city centre, lively squares and hip hotspots are just some of the reasons Amersfoort is worth a visit. Located in the middle of the Netherlands, the city is easily accessible by car and train. And with a calendar full with events and festivals, there is always something going on, whatever the season. Local Koen Overeem was born and raised in Amersfoort. He is now the owner of Rock City Brewery. “The name was inspired by the history of the city. The nickname of Amersfoort is ‘boulder city’. History says that a squire challenged his 40  |  Issue 71  |  November 2019

friends to bring a very large boulder over a distance of around ten kilometres from Soesterberg to Amersfoort by hand. They succeeded and this was celebrated with lots of food and beer.” Nowadays, that famous boulder is displayed along the city centre ring. There are five main attributes that distinguish Amersfoort from other cities, and Overeem is undoubtedly the perfect person to speak about them: “Amersfoort has a rich history with beer. At one time, the breweries here were even bigger than Heineken. Beer culture is part of the city’s DNA. And there is a great connection with

all the hospitality and welcoming terraces that can be found in the city. For tourists who are looking for something more than just a canal tour – although this can, of course, also be done here – Amersfoort has many things to offer.”

The first thing distinguishing Amersfoort from other cities is its beautiful city centre, full of history. One of the great things is that the old city wall is still visible. This was previously used as a protection against enemies. Overeem explains: “Since Amersfoort was a beer city, one of the things that was thrown over the wall