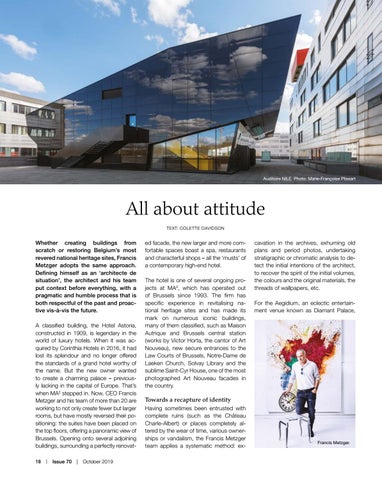 All about attitude TEXT: COLETTE DAVIDSON

Whether creating buildings from scratch or restoring Belgium’s most revered national heritage sites, Francis Metzger adopts the same approach. Defining himself as an ‘architecte de situation’, the architect and his team put context before everything, with a pragmatic and humble process that is both respectful of the past and proactive vis-à-vis the future. A classified building, the Hotel Astoria, constructed in 1909, is legendary in the world of luxury hotels. When it was acquired by Corinthia Hotels in 2016, it had lost its splendour and no longer offered the standards of a grand hotel worthy of the name. But the new owner wanted to create a charming palace – previously lacking in the capital of Europe. That’s when MA2 stepped in. Now, CEO Francis Metzger and his team of more than 20 are working to not only create fewer but larger rooms, but have mostly reversed their positioning: the suites have been placed on the top floors, offering a panoramic view of Brussels. Opening onto several adjoining buildings, surrounding a perfectly renovat18  |  Issue 70  |  October 2019

ed facade, the new larger and more comfortable spaces boast a spa, restaurants and characterful shops – all the ‘musts’ of a contemporary high-end hotel. The hotel is one of several ongoing projects at MA2, which has operated out of Brussels since 1993. The firm has specific experience in revitalising national heritage sites and has made its mark on numerous iconic buildings, many of them classified, such as Maison Autrique and Brussels central station (works by Victor Horta, the cantor of Art Nouveau), new secure entrances to the Law Courts of Brussels, Notre-Dame de Laeken Church, Solvay Library and the sublime Saint-Cyr House, one of the most photographed Art Nouveau facades in the country.

cavation in the archives, exhuming old plans and period photos, undertaking stratigraphic or chromatic analysis to detect the initial intentions of the architect, to recover the spirit of the initial volumes, the colours and the original materials, the threads of wallpapers, etc. For the Aegidium, an eclectic entertainment venue known as Diamant Palace,

Towards a recapture of identity Having sometimes been entrusted with complete ruins (such as the Château Charle-Albert) or places completely altered by the wear of time, various ownerships or vandalism, the Francis Metzger team applies a systematic method: ex-