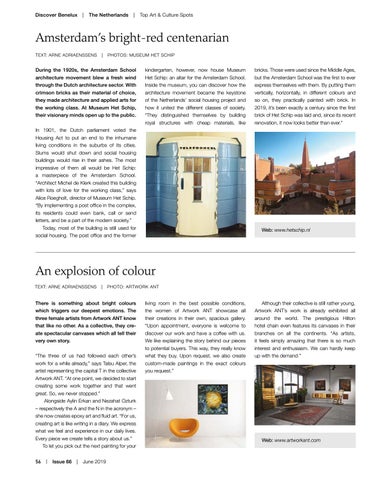 During the 1920s, the Amsterdam School architecture movement blew a fresh wind through the Dutch architecture sector. With crimson bricks as their material of choice, they made architecture and applied arts for the working class. At Museum Het Schip, their visionary minds open up to the public.

kindergarten, however, now house Museum Het Schip: an altar for the Amsterdam School. Inside the museum, you can discover how the architecture movement became the keystone of the Netherlands’ social housing project and how it united the different classes of society. “They distinguished themselves by building royal structures with cheap materials, like

In 1901, the Dutch parliament voted the Housing Act to put an end to the inhumane living conditions in the suburbs of its cities. Slums would shut down and social housing buildings would rise in their ashes. The most impressive of them all would be Het Schip: a masterpiece of the Amsterdam School. “Architect Michel de Klerk created this building with lots of love for the working class,” says Alice Roegholt, director of Museum Het Schip. “By implementing a post office in the complex, its residents could even bank, call or send letters, and be a part of the modern society.” Today, most of the building is still used for social housing. The post office and the former

bricks. Those were used since the Middle Ages, but the Amsterdam School was the first to ever express themselves with them. By putting them vertically, horizontally, in different colours and so on, they practically painted with brick. In 2019, it’s been exactly a century since the first brick of Het Schip was laid and, since its recent renovation, it now looks better than ever.”

There is something about bright colours which triggers our deepest emotions. The three female artists from Artwork ANT know that like no other. As a collective, they create spectacular canvases which all tell their very own story. “The three of us had followed each other’s work for a while already,” says Talsu Alper, the artist representing the capital T in the collective Artwork ANT. “At one point, we decided to start creating some work together and that went great. So, we never stopped.” Alongside Aylin Erkan and Nezahat Ozturk – respectively the A and the N in the acronym – she now creates epoxy art and fluid art. “For us, creating art is like writing in a diary. We express what we feel and experience in our daily lives. Every piece we create tells a story about us.” To let you pick out the next painting for your 56  |  Issue 66  |  June 2019

living room in the best possible conditions, the women of Artwork ANT showcase all their creations in their own, spacious gallery. “Upon appointment, everyone is welcome to discover our work and have a coffee with us. We like explaining the story behind our pieces to potential buyers. This way, they really know what they buy. Upon request, we also create custom-made paintings in the exact colours you request.”

Although their collective is still rather young, Artwork ANT’s work is already exhibited all around the world. The prestigious Hilton hotel chain even features its canvases in their branches on all the continents. “As artists, it feels simply amazing that there is so much interest and enthusiasm. We can hardly keep up with the demand.”