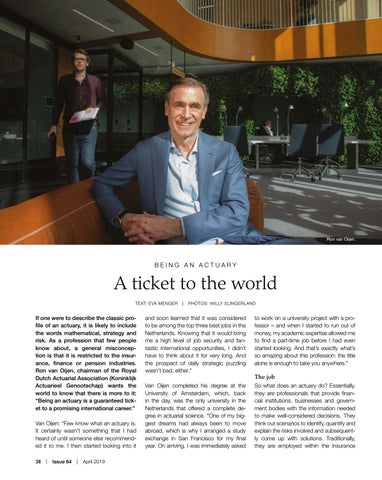 If one were to describe the classic profile of an actuary, it is likely to include the words mathematical, strategy and risk. As a profession that few people know about, a general misconception is that it is restricted to the insurance, finance or pension industries. Ron van Oijen, chairman of the Royal Dutch Actuarial Association (Koninklijk Actuarieel Genootschap) wants the world to know that there is more to it: “Being an actuary is a guaranteed ticket to a promising international career.” Van Oijen: “Few know what an actuary is. It certainly wasn’t something that I had heard of until someone else recommended it to me. I then started looking into it 38  |  Issue 64  |  April 2019

and soon learned that it was considered to be among the top three best jobs in the Netherlands. Knowing that it would bring me a high level of job security and fantastic international opportunities, I didn’t have to think about it for very long. And the prospect of daily strategic puzzling wasn’t bad, either.”

to work on a university project with a professor – and when I started to run out of money, my academic expertise allowed me to find a part-time job before I had even started looking. And that’s exactly what’s so amazing about this profession: the title alone is enough to take you anywhere.”

Van Oijen completed his degree at the University of Amsterdam, which, back in the day, was the only university in the Netherlands that offered a complete degree in actuarial science. “One of my biggest dreams had always been to move abroad, which is why I arranged a study exchange in San Francisco for my final year. On arriving, I was immediately asked

So what does an actuary do? Essentially, they are professionals that provide financial institutions, businesses and government bodies with the information needed to make well-considered decisions. They think out scenarios to identify, quantify and explain the risks involved and subsequently come up with solutions. Traditionally, they are employed within the insurance