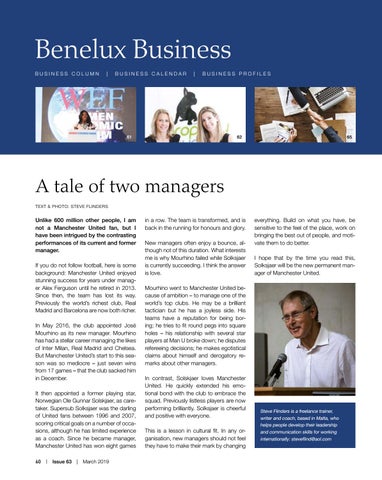 Unlike 600 million other people, I am not a Manchester United fan, but I have been intrigued by the contrasting performances of its current and former manager. If you do not follow football, here is some background: Manchester United enjoyed stunning success for years under manager Alex Ferguson until he retired in 2013. Since then, the team has lost its way. Previously the world’s richest club, Real Madrid and Barcelona are now both richer. In May 2016, the club appointed José Mourhino as its new manager. Mourhino has had a stellar career managing the likes of Inter Milan, Real Madrid and Chelsea. But Manchester United’s start to this season was so mediocre – just seven wins from 17 games – that the club sacked him in December. It then appointed a former playing star, Norwegian Ole Gunnar Solskjaer, as caretaker. Supersub Solksjaer was the darling of United fans between 1996 and 2007, scoring critical goals on a number of occasions, although he has limited experience as a coach. Since he became manager, Manchester United has won eight games 60  |  Issue 63  |  March 2019

in a row. The team is transformed, and is back in the running for honours and glory. New managers often enjoy a bounce, although not of this duration. What interests me is why Mourhino failed while Solksjaer is currently succeeding. I think the answer is love.

everything. Build on what you have, be sensitive to the feel of the place, work on bringing the best out of people, and motivate them to do better. I hope that by the time you read this, Solksjaer will be the new permanent manager of Manchester United.

Mourhino went to Manchester United because of ambition – to manage one of the world’s top clubs. He may be a brilliant tactician but he has a joyless side. His teams have a reputation for being boring; he tries to fit round pegs into square holes – his relationship with several star players at Man U broke down; he disputes refereeing decisions; he makes egotistical claims about himself and derogatory remarks about other managers. In contrast, Solskjaer loves Manchester United. He quickly extended his emotional bond with the club to embrace the squad. Previously listless players are now performing brilliantly. Solksjaer is cheerful and positive with everyone. This is a lesson in cultural fit. In any organisation, new managers should not feel they have to make their mark by changing