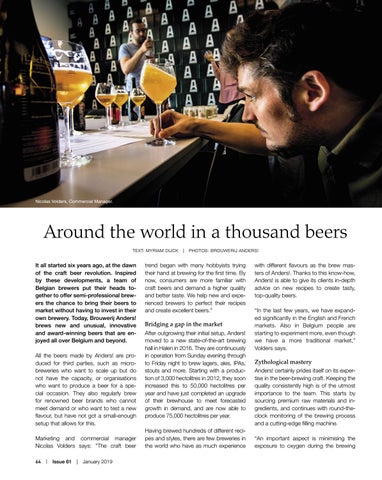 Around the world in a thousand beers TEXT: MYRIAM DIJCK  |  PHOTOS: BROUWERIJ ANDERS!

It all started six years ago, at the dawn of the craft beer revolution. Inspired by these developments, a team of Belgian brewers put their heads together to offer semi-professional brewers the chance to bring their beers to market without having to invest in their own brewery. Today, Brouwerij Anders! brews new and unusual, innovative and award-winning beers that are enjoyed all over Belgium and beyond. All the beers made by Anders! are produced for third parties, such as microbreweries who want to scale up but do not have the capacity, or organisations who want to produce a beer for a special occasion. They also regularly brew for renowned beer brands who cannot meet demand or who want to test a new flavour, but have not got a small-enough setup that allows for this. Marketing and commercial manager Nicolas Volders says: “The craft beer 64  |  Issue 61  |  January 2019

trend began with many hobbyists trying their hand at brewing for the first time. By now, consumers are more familiar with craft beers and demand a higher quality and better taste. We help new and experienced brewers to perfect their recipes and create excellent beers.”

Bridging a gap in the market After outgrowing their initial setup, Anders! moved to a new state-of-the-art brewing hall in Halen in 2016. They are continuously in operation from Sunday evening through to Friday night to brew lagers, ales, IPAs, stouts and more. Starting with a production of 3,000 hectolitres in 2012, they soon increased this to 50,000 hectolitres per year and have just completed an upgrade of their brewhouse to meet forecasted growth in demand, and are now able to produce 75,000 hectolitres per year. Having brewed hundreds of different recipes and styles, there are few breweries in the world who have as much experience

with different flavours as the brew masters of Anders!. Thanks to this know-how, Anders! is able to give its clients in-depth advice on new recipes to create tasty, top-quality beers. “In the last few years, we have expanded significantly in the English and French markets. Also in Belgium people are starting to experiment more, even though we have a more traditional market,” Volders says.

Zythological mastery Anders! certainly prides itself on its expertise in the beer-brewing craft. Keeping the quality consistently high is of the utmost importance to the team. This starts by sourcing premium raw materials and ingredients, and continues with round-theclock monitoring of the brewing process and a cutting-edge filling machine. “An important aspect is minimising the exposure to oxygen during the brewing