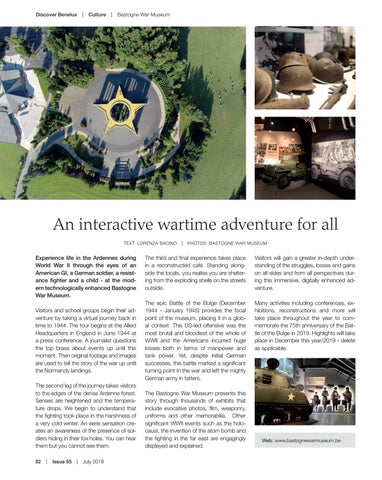 Experience life in the Ardennes during World War II through the eyes of an American GI, a German soldier, a resistance fighter and a child - at the modern technologically enhanced Bastogne War Museum. Visitors and school groups begin their adventure by taking a virtual journey back in time to 1944. The tour begins at the Allied Headquarters in England in June 1944 at a press conference. A journalist questions the top brass about events up until this moment. Then original footage and images are used to tell the story of the war up until the Normandy landings. The second leg of the journey takes visitors to the edges of the dense Ardenne forest. Senses are heightened and the temperature drops. We begin to understand that the fighting took place in the harshness of a very cold winter. An eerie sensation creates an awareness of the presence of soldiers hiding in their fox holes. You can hear them but you cannot see them. 82  |  Issue 55  |  July 2018

The third and final experience takes place in a reconstructed café. Standing alongside the locals, you realise you are sheltering from the exploding shells on the streets outside.

Visitors will gain a greater in-depth understanding of the struggles, losses and gains on all sides and from all perspectives during this immersive, digitally enhanced adventure.

The epic Battle of the Bulge (December 1944 - January 1945) provides the focal point of the museum, placing it in a global context. This US-led offensive was the most brutal and bloodiest of the whole of WWII and the Americans incurred huge losses both in terms of manpower and tank power. Yet, despite initial German successes, this battle marked a significant turning point in the war and left the mighty German army in tatters.

Many activities including conferences, exhibitions, reconstructions and more will take place throughout the year to commemorate the 75th anniversary of the Battle of the Bulge in 2019. Highlights will take place in December this year/2019 - delete as applicable.

The Bastogne War Museum presents this story through thousands of exhibits that include evocative photos, film, weaponry, uniforms and other memorabilia. Other significant WWII events such as the holocaust, the invention of the atom bomb and the fighting in the far east are engagingly displayed and explained.