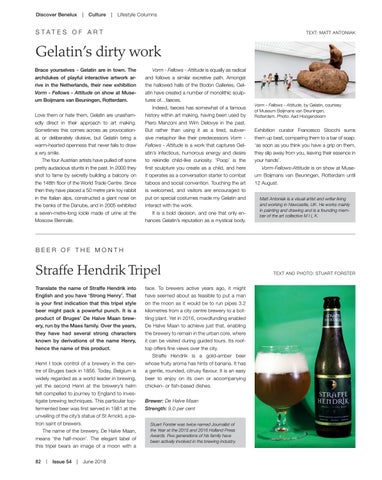 Gelatin’s dirty work Brace yourselves - Gelatin are in town. The archdukes of playful interactive artwork arrive in the Netherlands, their new exhibition Vorm - Fellows - Attitude on show at Museum Boijmans van Beuningen, Rotterdam. Love them or hate them, Gelatin are unashamedly direct in their approach to art making. Sometimes this comes across as provocational, or deliberately divisive, but Gelatin bring a warm-hearted openness that never fails to draw a wry smile. The four Austrian artists have pulled off some pretty audacious stunts in the past. In 2000 they shot to fame by secretly building a balcony on the 148th floor of the World Trade Centre. Since then they have placed a 50 metre pink toy rabbit in the Italian alps, constructed a giant nose on the banks of the Danube, and in 2005 exhibited a seven-metre-long icicle made of urine at the Moscow Biennale.

Vorm - Fellows - Attitude is equally as radical and follows a similar excretive path. Amongst the hallowed halls of the Bodon Galleries, Gelatin have created a number of monolithic sculptures of…faeces. Indeed, faeces has somewhat of a famous history within art making, having been used by Piero Manzoni and Wim Delovye in the past. But rather than using it as a tired, subversive metaphor like their predecessors Vorm Fellows - Attitude is a work that captures Gelatin’s infectious, humorous energy and desire to rekindle child-like curiosity. ‘Poop’ is the first sculpture you create as a child, and here it operates as a conversation starter to combat taboos and social convention. Touching the art is welcomed, and visitors are encouraged to put on special costumes made my Gelatin and interact with the work. It is a bold decision, and one that only enhances Gelatin’s reputation as a mystical body.

Exhibition curator Francesco Stocchi sums them up best, comparing them to a bar of soap: ‘as soon as you think you have a grip on them, they slip away from you, leaving their essence in your hands’. Vorm-Fellows-Attitude is on show at Museum Boijmans van Beuningen, Rotterdam until 12 August. Matt Antoniak is a visual artist and writer living and working in Newcastle, UK. He works mainly in painting and drawing and is a founding member of the art collective M I L K.

Straffe Hendrik Tripel Translate the name of Straffe Hendrik into English and you have ‘Strong Henry’. That is your first indication that this tripel style beer might pack a powerful punch. It is a product of Bruges’ De Halve Maan brewery, run by the Maes family. Over the years, they have had several strong characters known by derivations of the name Henry, hence the name of this product. Henri I took control of a brewery in the centre of Bruges back in 1856. Today, Belgium is widely regarded as a world leader in brewing, yet the second Henri at the brewery’s helm felt compelled to journey to England to investigate brewing techniques. This particular topfermented beer was first served in 1981 at the unveiling of the city’s statue of St Arnold, a patron saint of brewers. The name of the brewery, De Halve Maan, means ‘the half-moon’. The elegant label of this tripel bears an image of a moon with a 82  |  Issue 54  |  June 2018

face. To brewers active years ago, it might have seemed about as feasible to put a man on the moon as it would be to run pipes 3.2 kilometres from a city centre brewery to a bottling plant. Yet in 2016, crowdfunding enabled De Halve Maan to achieve just that, enabling the brewery to remain in the urban core, where it can be visited during guided tours. Its rooftop offers fine views over the city. Straffe Hendrik is a gold-amber beer whose fruity aroma has hints of banana. It has a gentle, rounded, citrusy flavour. It is an easy beer to enjoy on its own or accompanying chicken- or fish-based dishes. Brewer: De Halve Maan Strength: 9.0 per cent Stuart Forster was twice named Journalist of the Year at the 2015 and 2016 Holland Press Awards. Five generations of his family have been actively involved in the brewing industry.