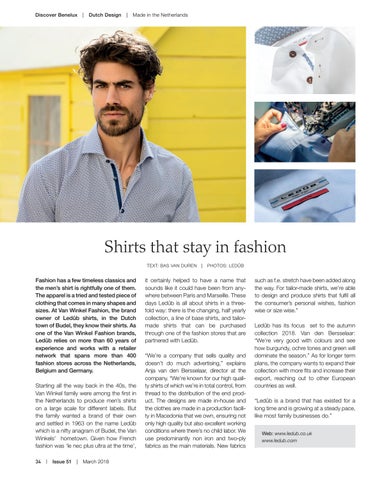 Fashion has a few timeless classics and the men’s shirt is rightfully one of them. The apparel is a tried and tested piece of clothing that comes in many shapes and sizes. At Van Winkel Fashion, the brand owner of Ledûb shirts, in the Dutch town of Budel, they know their shirts. As one of the Van Winkel Fashion brands, Ledûb relies on more than 60 years of experience and works with a retailer network that spans more than 400 fashion stores across the Netherlands, Belgium and Germany. Starting all the way back in the 40s, the Van Winkel family were among the first in the Netherlands to produce men’s shirts on a large scale for different labels. But the family wanted a brand of their own and settled in 1963 on the name Ledûb which is a nifty anagram of Budel, the Van Winkels’ hometown. Given how French fashion was ‘le nec plus ultra at the time’, 34  |  Issue 51  |  March 2018

it certainly helped to have a name that sounds like it could have been from anywhere between Paris and Marseille. These days Ledûb is all about shirts in a threefold way: there is the changing, half yearly collection, a line of base shirts, and tailormade shirts that can be purchased through one of the fashion stores that are partnered with Ledûb. “We’re a company that sells quality and doesn’t do much advertising,” explains Anja van den Bersselaar, director at the company. “We’re known for our high quality shirts of which we’re in total control, from thread to the distribution of the end product. The designs are made in-house and the clothes are made in a production facility in Macedonia that we own, ensuring not only high quality but also excellent working conditions where there’s no child labor. We use predominantly non iron and two-ply fabrics as the main materials. New fabrics

such as f.e. stretch have been added along the way. For tailor-made shirts, we’re able to design and produce shirts that fulfil all the consumer’s personal wishes, fashion wise or size wise.” Ledûb has its focus set to the autumn collection 2018. Van den Bersselaar: “We’re very good with colours and see how burgundy, ochre tones and green will dominate the season.” As for longer term plans, the company wants to expand their collection with more fits and increase their export, reaching out to other European countries as well. “Ledûb is a brand that has existed for a long time and is growing at a steady pace, like most family businesses do.” Web: www.ledub.co.uk www.ledub.com