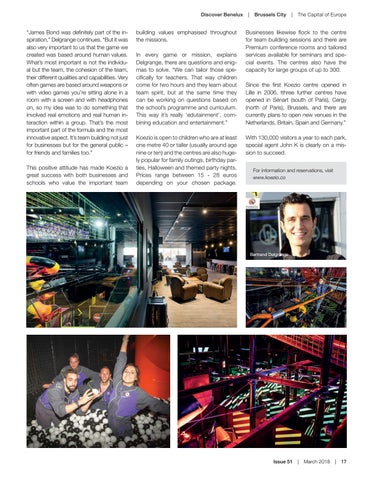 “James Bond was definitely part of the inspiration,” Delgrange continues. “But it was also very important to us that the game we created was based around human values. What’s most important is not the individual but the team, the cohesion of the team, their different qualities and capabilities. Very often games are based around weapons or with video games you’re sitting alone in a room with a screen and with headphones on, so my idea was to do something that involved real emotions and real human interaction within a group. That’s the most important part of the formula and the most innovative aspect. It’s team building not just for businesses but for the general public – for friends and families too.” This positive attitude has made Koezio a great success with both businesses and schools who value the important team

building values emphasised throughout the missions. In every game or mission, explains Delgrange, there are questions and enigmas to solve. “We can tailor those specifically for teachers. That way children come for two hours and they learn about team spirit, but at the same time they can be working on questions based on the school’s programme and curriculum. This way it’s really ‘edutainment’, combining education and entertainment.” Koezio is open to children who are at least one metre 40 or taller (usually around age nine or ten) and the centres are also hugely popular for family outings, birthday parties, Halloween and themed party nights. Prices range between 15 - 28 euros depending on your chosen package.

Businesses likewise flock to the centre for team building sessions and there are Premium conference rooms and tailored services available for seminars and special events. The centres also have the capacity for large groups of up to 300. Since the first Koezio centre opened in Lille in 2006, tthree further centres have opened in Sénart (south of Paris), Cergy (north of Paris), Brussels, and there are currently plans to open new venues in the Netherlands, Britain, Spain and Germany.” With 130,000 visitors a year to each park, special agent John K is clearly on a mission to succeed. For information and reservations, visit www.koezio.co