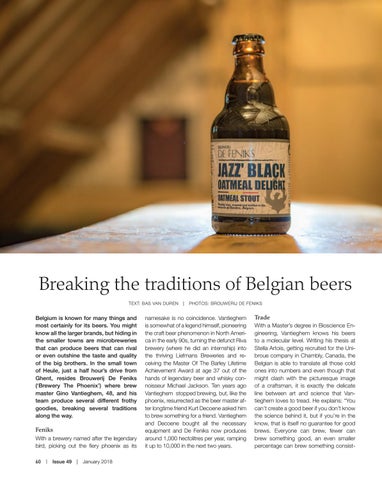 Belgium is known for many things and most certainly for its beers. You might know all the larger brands, but hiding in the smaller towns are microbreweries that can produce beers that can rival or even outshine the taste and quality of the big brothers. In the small town of Heule, just a half hour’s drive from Ghent, resides Brouwerij De Feniks (‘Brewery The Phoenix’) where brew master Gino Vantieghem, 48, and his team produce several different frothy goodies, breaking several traditions along the way.

namesake is no coincidence. Vantieghem is somewhat of a legend himself, pioneering the craft beer phenomenon in North America in the early 90s, turning the defunct Riva brewery (where he did an internship) into the thriving Liefmans Breweries and receiving the Master Of The Barley Lifetime Achievement Award at age 37 out of the hands of legendary beer and whisky connoisseur Michael Jackson. Ten years ago Vantieghem stopped brewing, but, like the phoenix, resurrected as the beer master after longtime friend Kurt Decoene asked him to brew something for a friend. Vantieghem and Decoene bought all the necessary equipment and De Feniks now produces around 1,000 hectolitres per year, ramping it up to 10,000 in the next two years.

Trade With a Master’s degree in Bioscience Engineering, Vantieghem knows his beers to a molecular level. Writing his thesis at Stella Artois, getting recruited for the Unibroue company in Chambly, Canada, the Belgian is able to translate all those cold ones into numbers and even though that might clash with the picturesque image of a craftsman, it is exactly the delicate line between art and science that Vantieghem loves to tread. He explains: “You can’t create a good beer if you don’t know the science behind it, but if you’re in the know, that is itself no guarantee for good brews. Everyone can brew, fewer can brew something good, an even smaller percentage can brew something consist-