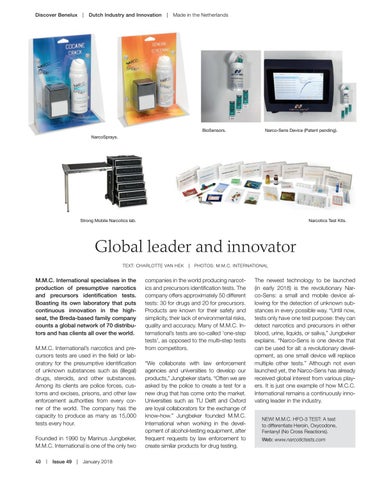 M.M.C. International specialises in the production of presumptive narcotics and precursors identification tests. Boasting its own laboratory that puts continuous innovation in the highseat, the Breda-based family company counts a global network of 70 distributors and has clients all over the world. M.M.C. International’s narcotics and precursors tests are used in the field or laboratory for the presumptive identification of unknown substances such as (illegal) drugs, steroids, and other substances. Among its clients are police forces, customs and excises, prisons, and other law enforcement authorities from every corner of the world. The company has the capacity to produce as many as 15,000 tests every hour. Founded in 1990 by Marinus Jungbeker, M.M.C. International is one of the only two 40  |  Issue 49  |  January 2018

companies in the world producing narcotics and precursors identification tests. The company offers approximately 50 different tests: 30 for drugs and 20 for precursors. Products are known for their safety and simplicity, their lack of environmental risks, quality and accuracy. Many of M.M.C. International’s tests are so-called ‘one-step tests’, as opposed to the multi-step tests from competitors. “We collaborate with law enforcement agencies and universities to develop our products,” Jungbeker starts. “Often we are asked by the police to create a test for a new drug that has come onto the market. Universities such as TU Delft and Oxford are loyal collaborators for the exchange of know-how.” Jungbeker founded M.M.C. International when working in the development of alcohol-testing equipment, after frequent requests by law enforcement to create similar products for drug testing.

The newest technology to be launched (in early 2018) is the revolutionary Narco-Sens: a small and mobile device allowing for the detection of unknown substances in every possible way. “Until now, tests only have one test purpose: they can detect narcotics and precursors in either blood, urine, liquids, or saliva,” Jungbeker explains. “Narco-Sens is one device that can be used for all: a revolutionary development, as one small device will replace multiple other tests.” Although not even launched yet, the Narco-Sens has already received global interest from various players. It is just one example of how M.C.C. International remains a continuously innovating leader in the industry. NEW! M.M.C. HFO-3 TEST: A test to differentiate Heroin, Oxycodone, Fentanyl (No Cross Reactions). Web: www.narcotictests.com