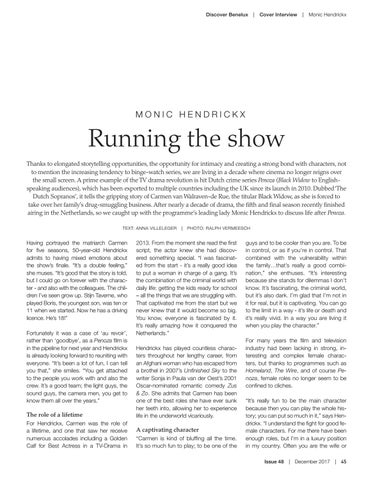 Running the show Thanks to elongated storytelling opportunities, the opportunity for intimacy and creating a strong bond with characters, not to mention the increasing tendency to binge-watch series, we are living in a decade where cinema no longer reigns over the small screen. A prime example of the TV drama revolution is hit Dutch crime series Penoza (Black Widow to Englishspeaking audiences), which has been exported to multiple countries including the UK since its launch in 2010. Dubbed ‘The Dutch Sopranos’, it tells the gripping story of Carmen van Walraven-de Rue, the titular Black Widow, as she is forced to take over her family’s drug-smuggling business. After nearly a decade of drama, the fifth and final season recently finished airing in the Netherlands, so we caught up with the programme’s leading lady Monic Hendrickx to discuss life after Penoza. TEXT: ANNA VILLELEGER  |  PHOTO: RALPH VERMEESCH

Having portrayed the matriarch Carmen for five seasons, 50-year-old Hendrickx admits to having mixed emotions about the show’s finale. “It’s a double feeling,” she muses. “It’s good that the story is told, but I could go on forever with the character - and also with the colleagues. The children I’ve seen grow up. Stijn Taverne, who played Boris, the youngest son, was ten or 11 when we started. Now he has a driving licence. He’s 18!” Fortunately it was a case of ‘au revoir’, rather than ‘goodbye’, as a Penoza film is in the pipeline for next year and Hendrickx is already looking forward to reuniting with everyone. “It’s been a lot of fun, I can tell you that,” she smiles. “You get attached to the people you work with and also the crew. It’s a good team; the light guys, the sound guys, the camera men, you get to know them all over the years.”

2013. From the moment she read the first script, the actor knew she had discovered something special. “I was fascinated from the start - it’s a really good idea to put a woman in charge of a gang. It’s the combination of the criminal world with daily life: getting the kids ready for school – all the things that we are struggling with. That captivated me from the start but we never knew that it would become so big. You know, everyone is fascinated by it. It’s really amazing how it conquered the Netherlands.” Hendrickx has played countless characters throughout her lengthy career, from an Afghani woman who has escaped from a brothel in 2007’s Unfinished Sky to the writer Sonja in Paula van der Oest’s 2001 Oscar-nominated romantic comedy Zus & Zo. She admits that Carmen has been one of the best roles she have ever sunk her teeth into, allowing her to experience life in the underworld vicariously.

A captivating character “Carmen is kind of bluffing all the time. It’s so much fun to play; to be one of the

guys and to be cooler than you are. To be in control, or as if you’re in control. That combined with the vulnerability within the family…that’s really a good combination,” she enthuses. “It’s interesting because she stands for dilemmas I don’t know. It’s fascinating, the criminal world, but it’s also dark. I’m glad that I’m not in it for real, but it is captivating. You can go to the limit in a way - it’s life or death and it’s really vivid. In a way you are living it when you play the character.” For many years the film and television industry had been lacking in strong, interesting and complex female characters, but thanks to programmes such as Homeland, The Wire, and of course Penoza, female roles no longer seem to be confined to cliches. “It’s really fun to be the main character because then you can play the whole history; you can put so much in it,” says Hendrickx. “I understand the fight for good female characters. For me there have been enough roles, but I’m in a luxury position in my country. Often you are the wife or Issue 48  |  December 2017  |  45