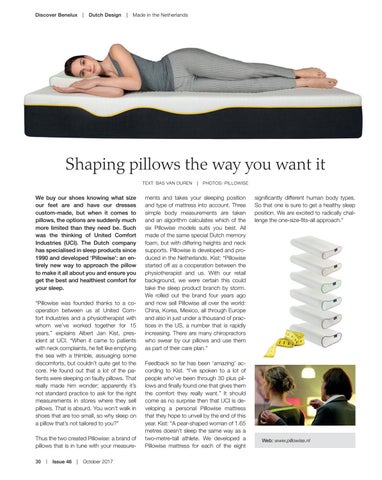 We buy our shoes knowing what size our feet are and have our dresses custom-made, but when it comes to pillows, the options are suddenly much more limited than they need be. Such was the thinking of United Comfort Industries (UCI). The Dutch company has specialised in sleep products since 1990 and developed ‘Pillowise’: an entirely new way to approach the pillow to make it all about you and ensure you get the best and healthiest comfort for your sleep. “Pillowise was founded thanks to a cooperation between us at United Comfort Industries and a physiotherapist with whom we’ve worked together for 15 years,” explains Albert Jan Kist, president at UCI. “When it came to patients with neck complaints, he felt like emptying the sea with a thimble, assuaging some discomforts, but couldn’t quite get to the core. He found out that a lot of the patients were sleeping on faulty pillows. That really made him wonder; apparently it’s not standard practice to ask for the right measurements in stores where they sell pillows. That is absurd. You won’t walk in shoes that are too small, so why sleep on a pillow that’s not tailored to you?” Thus the two created Pillowise: a brand of pillows that is in tune with your measure30  |  Issue 46  |  October 2017

ments and takes your sleeping position and type of mattress into account. Three simple body measurements are taken and an algorithm calculates which of the six Pillowise models suits you best. All made of the same special Dutch memory foam, but with differing heights and neck supports. Pillowise is developed and produced in the Netherlands. Kist: “Pillowise started off as a cooperation between the physiotherapist and us. With our retail background, we were certain this could take the sleep product branch by storm. We rolled out the brand four years ago and now sell Pillowise all over the world: China, Korea, Mexico, all through Europe and also in just under a thousand of practices in the US, a number that is rapidly increasing. There are many chiropractors who swear by our pillows and use them as part of their care plan.” Feedback so far has been ‘amazing’ according to Kist. “I’ve spoken to a lot of people who’ve been through 30 plus pillows and finally found one that gives them the comfort they really want.” It should come as no surprise then that UCI is developing a personal Pillowise mattress that they hope to unveil by the end of this year. Kist: “A pear-shaped woman of 1.65 metres doesn’t sleep the same way as a two-metre-tall athlete. We developed a Pillowise mattress for each of the eight

significantly different human body types. So that one is sure to get a healthy sleep position. We are excited to radically challenge the one-size-fits-all approach.”