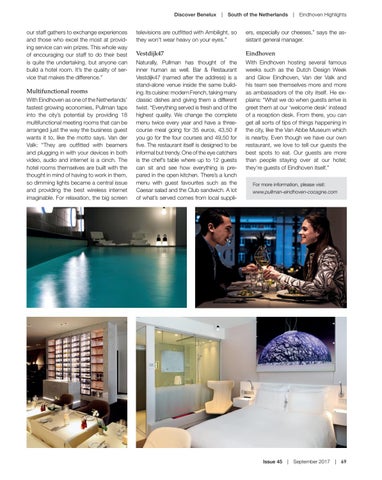 our staff gathers to exchange experiences and those who excel the most at providing service can win prizes. This whole way of encouraging our staff to do their best is quite the undertaking, but anyone can build a hotel room. It’s the quality of service that makes the difference.”

Multifunctional rooms With Eindhoven as one of the Netherlands’ fastest growing economies, Pullman taps into the city’s potential by providing 18 multifunctional meeting rooms that can be arranged just the way the business guest wants it to, like the motto says. Van der Valk: “They are outfitted with beamers and plugging in with your devices in both video, audio and internet is a cinch. The hotel rooms themselves are built with the thought in mind of having to work in them, so dimming lights became a central issue and providing the best wireless internet imaginable. For relaxation, the big screen

televisions are outfitted with Ambilight, so they won’t wear heavy on your eyes.”

Naturally, Pullman has thought of the inner human as well. Bar & Restaurant Vestdijk47 (named after the address) is a stand-alone venue inside the same building. Its cuisine: modern French, taking many classic dishes and giving them a different twist. “Everything served is fresh and of the highest quality. We change the complete menu twice every year and have a threecourse meal going for 35 euros, 43,50 if you go for the four courses and 49,50 for five. The restaurant itself is designed to be informal but trendy. One of the eye catchers is the chef’s table where up to 12 guests can sit and see how everything is prepared in the open kitchen. There’s a lunch menu with guest favourites such as the Caesar salad and the Club sandwich. A lot of what’s served comes from local suppli-

With Eindhoven hosting several famous weeks such as the Dutch Design Week and Glow Eindhoven, Van der Valk and his team see themselves more and more as ambassadors of the city itself. He explains: “What we do when guests arrive is greet them at our ‘welcome desk’ instead of a reception desk. From there, you can get all sorts of tips of things happening in the city, like the Van Abbe Museum which is nearby. Even though we have our own restaurant, we love to tell our guests the best spots to eat. Our guests are more than people staying over at our hotel; they’re guests of Eindhoven itself.” For more information, please visit: www.pullman-eindhoven-cocagne.com