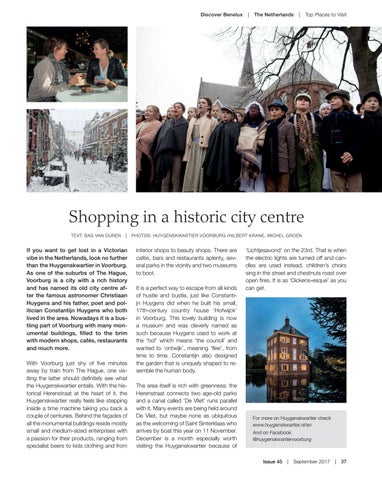 If you want to get lost in a Victorian vibe in the Netherlands, look no further than the Huygenskwartier in Voorburg. As one of the suburbs of The Hague, Voorburg is a city with a rich history and has named its old city centre after the famous astronomer Christiaan Huygens and his father, poet and politician Constantijn Huygens who both lived in the area. Nowadays it is a bustling part of Voorburg with many monumental buildings, filled to the brim with modern shops, cafés, restaurants and much more. With Voorburg just shy of five minutes away by train from The Hague, one visiting the latter should definitely see what the Huygenskwartier entails. With the historical Herenstraat at the heart of it, the Huygenskwartier really feels like stepping inside a time machine taking you back a couple of centuries. Behind the façades of all the monumental buildings reside mostly small and medium-sized enterprises with a passion for their products, ranging from specialist beers to kids clothing and from

interior shops to beauty shops. There are cafés, bars and restaurants aplenty, several parks in the vicinity and two museums to boot. It is a perfect way to escape from all kinds of hustle and bustle, just like Constantijn Huygens did when he built his small, 17th-century country house ‘Hofwijck’ in Voorburg. This lovely building is now a museum and was cleverly named as such because Huygens used to work at the ‘hof’ which means ‘the council’ and wanted to ‘ontwijk’, meaning ‘flee’, from time to time. Constantijn also designed the garden that is uniquely shaped to resemble the human body. The area itself is rich with greenness: the Herenstraat connects two age-old parks and a canal called ‘De Vliet’ runs parallel with it. Many events are being held around De Vliet, but maybe none as ubiquitous as the welcoming of Saint Sinterklaas who arrives by boat this year on 11 November. December is a month especially worth visiting the Huygenskwartier because of

‘Lichtjesavond’ on the 23rd. That is when the electric lights are turned off and candles are used instead, children’s choirs sing in the street and chestnuts roast over open fires. It is as ‘Dickens-esque’ as you can get.