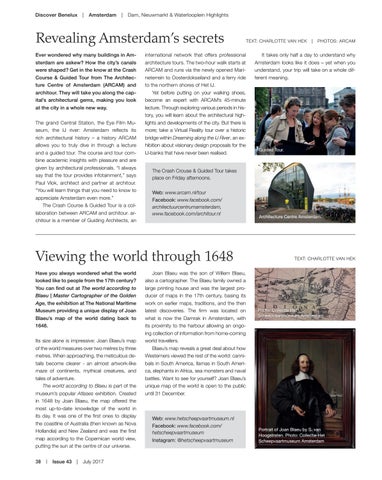 Revealing Amsterdam’s secrets Ever wondered why many buildings in Amsterdam are askew? How the city’s canals were shaped? Get in the know at the Crash Course & Guided Tour from The Architecture Centre of Amsterdam (ARCAM) and architour. They will take you along the capital’s architectural gems, making you look at the city in a whole new way. The grand Central Station, the Eye Film Museum, the IJ river: Amsterdam reflects its rich architectural history – a history ARCAM allows you to truly dive in through a lecture and a guided tour. The course and tour combine academic insights with pleasure and are given by architectural professionals. “I always say that the tour provides infotainment,” says Paul Vlok, architect and partner at architour. “You will learn things that you need to know to appreciate Amsterdam even more.” The Crash Course & Guided Tour is a collaboration between ARCAM and architour. architour is a member of Guiding Architects, an

international network that offers professional architecture tours. The two-hour walk starts at ARCAM and runs via the newly opened Marineterrein to Oosterdokseiland and a ferry ride to the northern shores of Het IJ. Yet before putting on your walking shoes, become an expert with ARCAM’s 45-minute lecture. Through exploring various periods in history, you will learn about the architectural highlights and developments of the city. But there is more; take a Virtual Reality tour over a historic bridge within Dreaming along the IJ River, an exhibition about visionary design proposals for the IJ-banks that have never been realised.

Its size alone is impressive: Joan Blaeu’s map of the world measures over two metres by three metres. When approaching, the meticulous details become clearer - an almost artwork-like maze of continents, mythical creatures, and tales of adventure. The world according to Blaeu is part of the museum’s popular Atlases exhibition. Created in 1648 by Joan Blaeu, the map offered the most up-to-date knowledge of the world in its day. It was one of the first ones to display the coastline of Australia (then known as Nova Hollandia) and New Zealand and was the first map according to the Copernican world view, putting the sun at the centre of our universe. 38  |  Issue 43  |  July 2017

It takes only half a day to understand why Amsterdam looks like it does – yet when you understand, your trip will take on a whole different meaning.

Viewing the world through 1648 Have you always wondered what the world looked like to people from the 17th century? You can find out at The world according to Blaeu | Master Cartographer of the Golden Age, the exhibition at The National Maritime Museum providing a unique display of Joan Blaeu’s map of the world dating back to 1648.

Joan Blaeu was the son of Willem Blaeu, also a cartographer. The Blaeu family owned a large printing house and was the largest producer of maps in the 17th century, basing its work on earlier maps, traditions, and the then latest discoveries. The firm was located on what is now the Damrak in Amsterdam, with its proximity to the harbour allowing an ongoing collection of information from home-coming world travellers. Blaeu’s map reveals a great deal about how Westerners viewed the rest of the world: cannibals in South America, llamas in South America, elephants in Africa, sea monsters and naval battles. Want to see for yourself? Joan Blaeu’s unique map of the world is open to the public until 31 December.