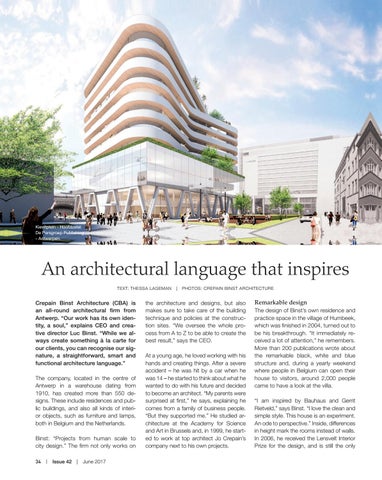 Crepain Binst Architecture (CBA) is an all-round architectural firm from Antwerp. “Our work has its own identity, a soul,” explains CEO and creative director Luc Binst. “While we always create something à la carte for our clients, you can recognise our signature, a straightforward, smart and functional architecture language.” The company, located in the centre of Antwerp in a warehouse dating from 1910, has created more than 550 designs. These include residences and public buildings, and also all kinds of interior objects, such as furniture and lamps, both in Belgium and the Netherlands. Binst: “Projects from human scale to city design.” The firm not only works on 34  |  Issue 42  |  June 2017

the architecture and designs, but also makes sure to take care of the building technique and policies at the construction sites. “We oversee the whole process from A to Z to be able to create the best result,” says the CEO. At a young age, he loved working with his hands and creating things. After a severe accident – he was hit by a car when he was 14 – he started to think about what he wanted to do with his future and decided to become an architect. “My parents were surprised at first,” he says, explaining he comes from a family of business people. “But they supported me.” He studied architecture at the Academy for Science and Art in Brussels and, in 1999, he started to work at top architect Jo Crepain’s company next to his own projects.

Remarkable design The design of Binst’s own residence and practice space in the village of Humbeek, which was finished in 2004, turned out to be his breakthrough. “It immediately received a lot of attention,” he remembers. More than 200 publications wrote about the remarkable black, white and blue structure and, during a yearly weekend where people in Belgium can open their house to visitors, around 2,000 people came to have a look at the villa. “I am inspired by Bauhaus and Gerrit Rietveld,” says Binst. “I love the clean and simple style. This house is an experiment. An ode to perspective.” Inside, differences in height mark the rooms instead of walls. In 2006, he received the Lensvelt Interior Prize for the design, and is still the only