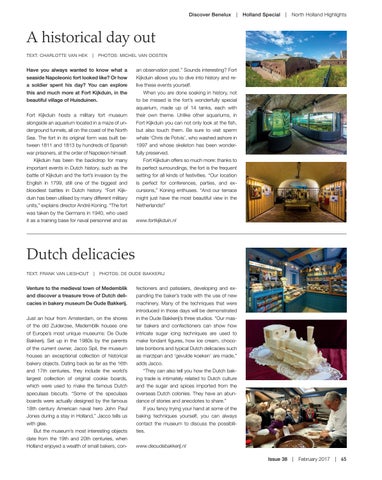 Have you always wanted to know what a seaside Napoleonic fort looked like? Or how a soldier spent his day? You can explore this and much more at Fort Kijkduin, in the beautiful village of Huisduinen. Fort Kijkduin hosts a military fort museum alongside an aquarium located in a maze of underground tunnels, all on the coast of the North Sea. The fort in its original form was built between 1811 and 1813 by hundreds of Spanish war prisoners, at the order of Napoleon himself. Kijkduin has been the backdrop for many important events in Dutch history, such as the battle of Kijkduin and the fort’s invasion by the English in 1799, still one of the biggest and bloodiest battles in Dutch history. “Fort Kijkduin has been utilised by many different military units,” explains director André Koning. “The fort was taken by the Germans in 1940, who used it as a training base for naval personnel and as

an observation post.” Sounds interesting? Fort Kijkduin allows you to dive into history and relive these events yourself. When you are done soaking in history, not to be missed is the fort’s wonderfully special aquarium, made up of 14 tanks, each with their own theme. Unlike other aquariums, in Fort Kijkduin you can not only look at the fish, but also touch them. Be sure to visit sperm whale ‘Chris de Potvis’, who washed ashore in 1997 and whose skeleton has been wonderfully preserved. Fort Kijkduin offers so much more: thanks to its perfect surroundings, the fort is the frequent setting for all kinds of festivities. “Our location is perfect for conferences, parties, and excursions,” Koning enthuses. “And our terrace might just have the most beautiful view in the Netherlands!” www.fortkijkduin.nl

Venture to the medieval town of Medemblik and discover a treasure trove of Dutch delicacies in bakery museum De Oude Bakkerij. Just an hour from Amsterdam, on the shores of the old Zuiderzee, Medemblik houses one of Europe’s most unique museums: De Oude Bakkerij. Set up in the 1980s by the parents of the current owner, Jacco Spil, the museum houses an exceptional collection of historical bakery objects. Dating back as far as the 16th and 17th centuries, they include the world’s largest collection of original cookie boards, which were used to make the famous Dutch speculaas biscuits. “Some of the speculaas boards were actually designed by the famous 18th century American naval hero John Paul Jones during a stay in Holland,” Jacco tells us with glee. But the museum’s most interesting objects date from the 19th and 20th centuries, when Holland enjoyed a wealth of small bakers, con-

fectioners and patissiers, developing and expanding the baker’s trade with the use of new machinery. Many of the techniques that were introduced in those days will be demonstrated in the Oude Bakkerij’s three studios. “Our master bakers and confectioners can show how intricate sugar icing techniques are used to make fondant figures, how ice cream, chocolate bonbons and typical Dutch delicacies such as marzipan and ‘gevulde koeken’ are made,” adds Jacco. “They can also tell you how the Dutch baking trade is intimately related to Dutch culture and the sugar and spices imported from the overseas Dutch colonies. They have an abundance of stories and anecdotes to share.” If you fancy trying your hand at some of the baking techniques yourself, you can always contact the museum to discuss the possibilities. www.deoudebakkerij.nl Issue 38  |  February 2017  |  65